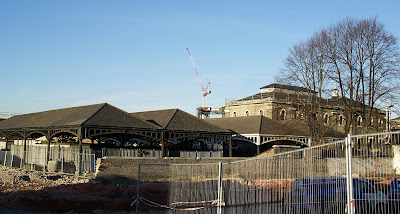 Bazalgette's great scheme for London's sewage transformed London and the Thames, and a surprising amount of it is visible on the surface. Most grandly, there are the embankments created along the Thames and the reshaping of the river itself.

At the other end of the scale, we have the Italianate buildings of Deptford Sewage Pumping Station. Despite the name, it's on the Greenwich side of Deptford Creek, and can be seen from Greenwich High Road too. The buildings still surviving opened in 1865 (although the left-hand part of the brick structure is a 1905 extension).

To the foreground of the picture above is the coal shed, with behind it the beam engine houses. The engines (later replaced by diesel and electric pumps) certainly had plenty of work to do. Three intercepting sewers, fed by smaller mains and local sewers, brought South London's sewage here. The pumping station then raised the sewage eighteen feet, after which it was originally discharged directly into the Thames. However, the Southern Outfall Sewer was soon completed and thereafter the pumped sewage was not discharged but flowed by gravity down to the outfall sewer at Crossness.

The flow of raw sewage into the river must have done little to enhance the already-industrialised Creek and Thames. Even after the sewage was rerouted to discreetly make its way via the Deptford pumps to Crossness, the pumping station didn't attract much civic pride. Dews, in his History of Deptford, failed to mention it when he listed the businesses along both shores of the Creek although he did include wharves, gas works, soap works, a kamptulicon factory and a chemical works among others.

Maybe the distinctive smell was the reason: a letter to the Kentish Mercury of 2 April 1889 complains about a (temporary) smell of sewage in Greenwich and comments that

There is always a disagreeable smell, more or less, at Deptford, of what appears to be sewage ... It would seem, on the face of it, that [the local authorities] are exceedingly apathetic, as the smell referred to at Deptford has been going on for a long time.

It is perhaps surprising that anyone could distinguish the smell of sewage among Deptford's other odours. Not only were many of the industries listed above less than fragrant, but there were the smells of the Foreign Cattle Market, the noisome soap and candle factory in Frankham Street, breweries and distilleries, glue works, tar tanks... While old photographs of the town are always fascinating, we should perhaps be very thankful that there was no way of recording its smells!