One of the major reasons for the Ghost Signs Archive is the realisation that these painted adverts are disappearing. The weather, demolition, cleaning them off or painting them over all contribute to that process.

How fast the process of disappearance can be was brought home to me by these photographs. They were taken by mickmct in Deptford in the 1980s and 1990s; do visit his flickr photostream for lots more ghost signs, many now gone, as well as more images of the High Street. 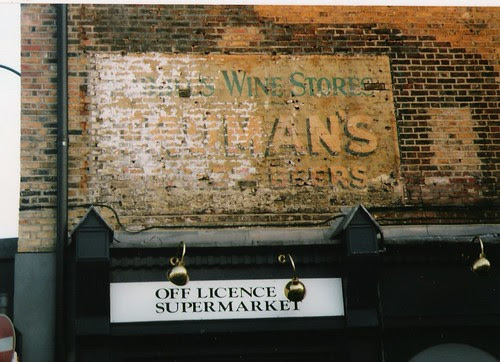 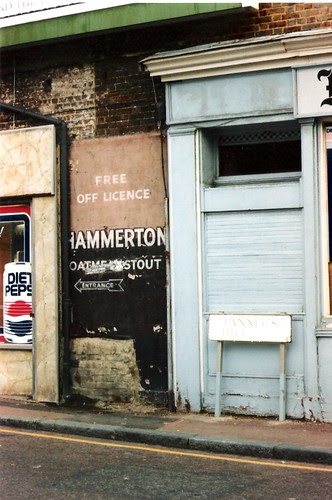 This image particularly appeared to me as it shows a building I've previously blogged about. It's 227 Deptford High Street in 1989, back before it became a 'building at risk'. I was particularly interested to see it here fulfilling its original purpose as a bakery. 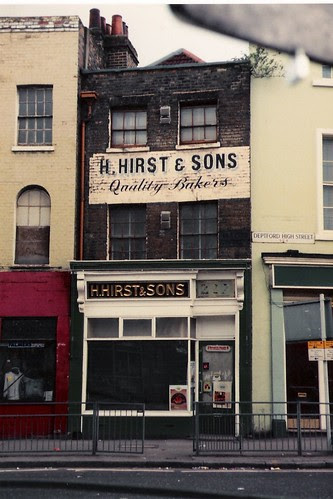 Micks photos are fascinating, not only do they document signs that are now gone but also some that have been 'touched up', see this before and after from the Midlands.

Thanks for the link Caroline, I enjoyed browsing those photos. Some of the Deptford ones are hard to recognise, others have hardly changed!

That's pretty heavy 'touching up', Sam! Tonight's post will be another ghost sign before and after, but less drastic.

When I moved to Deptford in 1978 to go to Goldsmiths I used to get cakes from that bakers and lots of students used to buy overalls from the outfitters next door.....