How do you say Deptford? 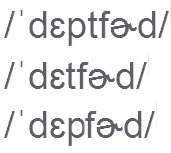 The name 'Deptford' comes from 'deep ford', named for just such a ford across the Ravensbourne. However, the word gained that 't' in the middle to reflect a shift in local pronunciation to 'Detford'. Lewisham Council's leaflet (PDF) dates the change to the fifteenth century. But is that still how we pronounce the name today?

Google for the pronunciation, and the top result carefully enunciates all the consonants. It's pretty awkward, and I doubt that many people would make the effort on a daily basis! Rather, the consensus seems to be that it's still 'Detford' - the 't' somewhat softened by the London accent. That is, unless you take the train from London Bridge: the automated announcement's emphatic 'DeTTford' is very un-London with its crisp, sharp 't'.

Just to complicate matters further, seventeenth-century sailors pronounced the name as 'didfford'. However, they were 'notorious for the strangeness of their speech'. This rather special group aside, the 'Detford' pronunciation appears to have persisted across five or six centuries.

Email ThisBlogThis!Share to TwitterShare to FacebookShare to Pinterest
Labels: deptford

Detfud (haven't got the IPA characters) definitely, unless you replace the /t/ with a glottal stop.

I'm pretty sure that pronouncing the "p" is just ignorance. And it's not the London Bridge announcer's fault if she's from Chelsea.

I have grave suspicions that the 'pt' version is computer-generated without benefit of local knowledge!

I would even go so far as to say it's De'fud!

How do you say Millwall?
I sort of leave out the "ll" more like miwall.