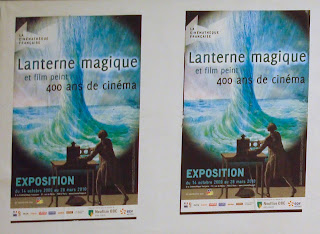 Having followed the Invisible Paris contemporary architecture walk (which I highly recommend) to Bercy, I was delighted to see that the Cinamatheque had an exhibition on magic lanterns. I'd rather fallen in love with this form of entertainment during a show at the British Library, so it was lovely to explore the history further.

Drawing on their own vast collections as well as those of the Museo Nazionale del Cinema de Turin, the Cinematheque has brought to life centuries of magic lantern history. There are plenty of slides being projected around the exhibition space, while others are in display cases alongside lanterns. (My favourites included a lantern shaped like the Eiffel Tower.) Visitors can even have a go at operating a lantern themselves.

Among the stars of the show are slides from the Royal Polytechnic (now Westminster University; you can still see pre-cinema in its original theatre during the Professor Pepper's Ghost lecture series). The images are organised by theme, with sections ranging from education to eroticism. Alongside glass slides are early painted films, and another highlight was the projection of Emile Reynaud's 1894 Pantomimes Lumineuses, a hand-painted animation of a humorous visit to the beach complete with bathing huts and vintage swimwear. (See an extract here, although the image quality isn't as good).

Downstairs is the main cinema museum, which also covers pre-cinema and has some interesting magic lantern displays of its own as well as other early devices for seeing moving pictures. Here again, there are plenty of hands-on displays so you can enjoy these contraptions as they are meant to be used.