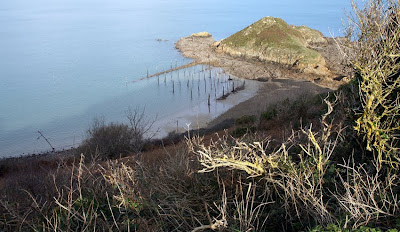 When Ireland's evangelising saints travelled to Brittany in the fifth century, they needed somewhere safe to moor their boats on its rocky shore. They chose Gwin Zegal, a sheltered spot near the town of Plouha where a little islet, accessible by land at high tide, provides protection. (A rock breakwater was added in the nineteenth century.) The name is a curious one, literally 'rye wine' but probably a corruption of 'wheat and rye' grown on the land above.

In common with many other northern European harbours of the time, this one used trees for mooring posts. Their roots were 'planted' in the sand, with stones on top to help stabilise them; the weight of the wet sand did most to hold the posts in place. 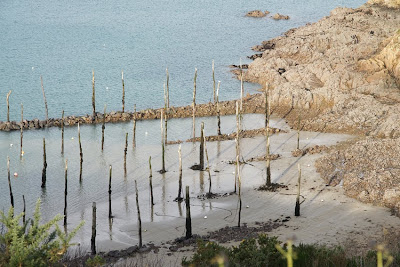 While most harbours have now adopted other methods of mooring boats, the trees of Gwin Zegal remain. They are an extraordinary site, the more so as the harbour is at the base of Brittany's highest cliffs. Although on a cold December day the moorings were empty, other photographs show boats still using the posts. It's a living piece of mediaeval maritime heritage. 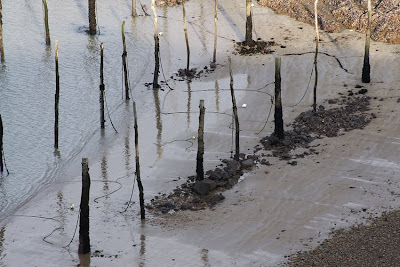 Further along the coast, these same cliffs played a part in more recent history. In the first eight months of 1944, local resistants from the Shelburn network helped 135 allied aviators shot down over France to escape to England. Many were hidden in houses in the commune before the signal came over the radio from London and they gathered in the home of the Gicquel family, the 'house of Alphonse', on suitable moonless nights. Resistants then led them across the dark countryside, strewn with mines, and down the steep cliffs by night; once the difficult descent to Bonaparte beach was completed the airmen were evacuated on a waiting ship. Eventually the Germans became suspicious and burned down the 'house of Alphonse', although the family were spared. 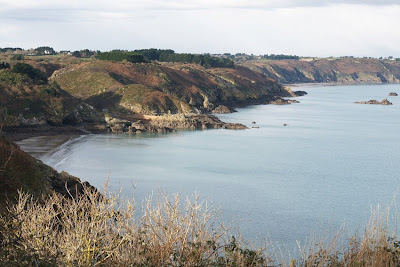 Yet another educative and illuminating post on Brittany - for which many thanks.
Can't help wondering if any of my (undoubtedly unsaintly) ancestors also visited Gwin Zegal ....
The languages would have been entirely different, of course: one Goidelic, the other Brythonic; suppose the missionaries must have had to learn Breton before leaving.