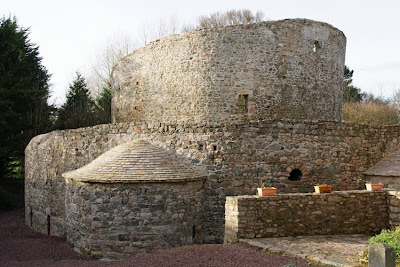 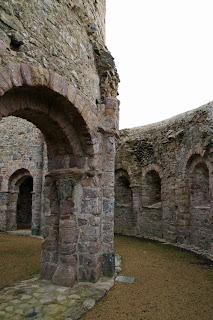 In a small village near Brittany's 'pink granite coast' is an extraordinary structure. Its circular construction inspired many conjectures about its age, origins and purpose: an ancient temple to the sun, a Celtic place of worship...

The truth is hardly less impressive. This romanesque temple was built in the eleventh century, and is modelled on the Church of the Holy Sepulchre in Jerusalem. Dedicated to the Virgin Mary, it may have been built by the Knights Templar but there's no evidence to prove that (perhaps romantic) conjecture. The inspiration and funds might equally have come from wealthy pilgrims to the holy land, for example. 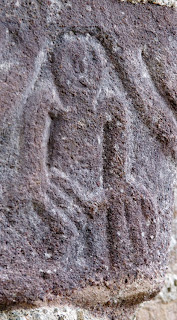 The temple is partly ruined - it was used as a source of stone for local buildings including the village church opposite. However, that only adds to its romance.

Other secrets lurk here too. Two concentric circles form an ambulatory, with Roman arches and pillars. On the capitals of those pillars are carvings, now very worn. Some show fabulous beasts and perhaps strangest of all, people with strangely large hands. Clumsy carving, or something more meaningful? 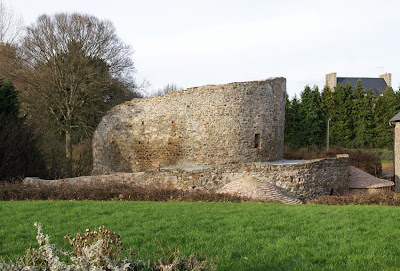 Aha! Have been watching out, lurking - and now rewarded with explanation: thank you. So it's 'granit rose' rather than red sandstone, and an extraordinary building in Brittany. Rough religious Romanesque - romantic! Intrigued by the large hands ...

I hope it was worth the wait! Those large hands are really fascinating, and I haven't come across any real explanation for them.

The explanation is that this was built by Templar Knights who were in essence Christian Kabbalists. There are many of these markings on ancient Jewish and Christian Temples, especiallt those of the Templar Knights. The artwork is of a Golem - a mystical creature created from clay by Master Kabbalists.

I'd be really interested in sources for that, as I haven't seen similar images of golems.

Hi I'm moving to Lanleff in Sept 2013 loved the placed so peaceful and a beautiful location. I'm a bit of a history geek and really looking forward to finding out about the history of the village and the church, surrounding area etc. Looking forward to meeting my new neighbours. I will be renovating an old stone barn, something I've been doing all my life but this time it's for me. See you all soon

Maybe you should consult this site
http://lanleff-temple.fr