There was a lovely story in the Bexley Times this week about a couple celebrating their 75th wedding anniversary. Lily Witcomb, 95, is married to Ernie, 91, owner of Witcomb Cycles. This cycling company has a long and distinguished history - much of it in Deptford. 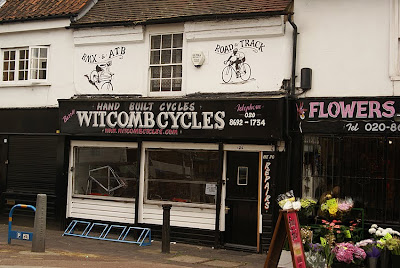 Although they moved to Wales in 2009, the company had for the previous 40 years made and sold its bicycles in Tanners Hill. It had been founded by Ernie in 1949, and at first he built the bikes in his back garden. The company grew steadily, and its racing bikes were used by among others Stan Brittain. He rode his Witcomb into 68th place in the 1958 Tour de France - one of the first British riders to finish the race. Witcomb even had their own racing team. Perhaps Lily's most literally visible contribution to their success was her choice of lilac as the company's racing colour.

There was something of a decline in the 1980s, when mountain bikes became popular, but the firm continued to be one of the few remaining frame builders in London until last year. The brand should continue from its new Welsh home, but the Deptford connection now seems to be at an end.