Eighteen months ago, I discussed the tiled mural on the former Kentish Drovers pub, Old Kent Road. The building is Victorian, and since a 1911 book, Old Country Inns of England, refers to it as 'the largest sign we have ever come across' and one of a diminishing number of such pictorial signs, it seems reasonable to assume the sign is nineteenth-century too.

Yesterday I took some better photos of the mural. I was intrigued to notice a detail in the bottom right corner: a name, presumably the artist's. Unfortunately the surname cannot fully be made out. It begins 'Alice Da...' but the rest has been obliterated. Neither Google nor Pevsner have been able to help, but I'd be intrigued to know who this Victorian artist was. 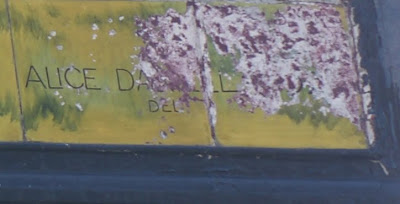 Tiled panels were popular adornments for commercial premises. Among their makers were local company Doulton, who had a factory in Lambeth and employed many women artists in the nineteenth century, as a contemporary watercolour records. Indeed, this pattern was common throughout the pottery industry and in 1861, nearly a third of the workforce in the Staffordshire potteries was female - rising to almost half by the end of the century.

Whatever the origins of these particular tiles, they are rich with appealing details. It's a real pity that their condition has been allowed to deterioriate so badly. 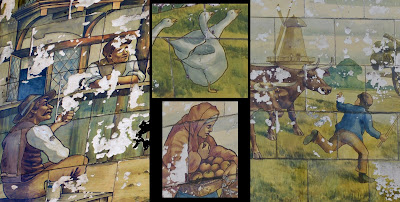 I used to live in this area, and whilst I am involved in more raunch than anything else, these days, have a background in history... So I am delighted to have found your blog. I have never seen this pub before, and now want to make a trip to track it down.

There were several Alices at Doulton's Lambeth factory, but not one, as far as I can see from the reference books I have, with a surname beginning 'Da'. Must be someone who worked at oen of the other factories, I should think.

The style of script, where the I is slotted over the L in ALICE is a typography that I have seen before. Problem being that I can't remember where. However, it looks later than mid-C19 to me.

As a red herring: I took a pot shot on Alice Daniell (though from the amount of space after the final L, a double-barrel surname looks possible) and googled it. Curiously, there was British artist called Alice Daniell, listed on auction house sites as active between 1914 - 16. But the only images of her work that I found were miniatures - which is about as far away from murals as you can get.

The Kentish Drovers has been a listed building (grade 2)since 1972 and specific reference is made to the "huge prominent signboard" but it seems to have offered it no protection. Sad. Very.

Thank you, Maisie! The pub is now a shabby-looking bar/restaurant, just down the road from the now-closed Livesey Museum. It's a sad bit of street.

Philip, thank you for looking. I did wonder if the letters below referred to a factory (DEU? DEL?) but again couldn't find/think of a likely contender.

Marmoset, I've been searching random names as well - I tried Darwell, Darvell etc but didn't think of Daniell. Had it not been for the 1911 book, I'd have thought this sign was later than nineteenth century too.