As Wednesday's film shows, the inscription of dates on buildings has been a common practice. (Also a potentially misleading one: the dates can refer to renovation or remodelling rather than the original construction.) Sometimes initials are added, and they can provide further clues to the building's past. 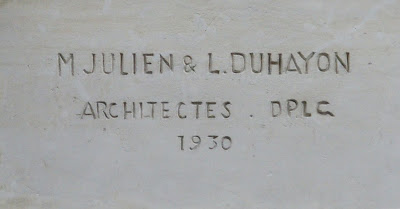 However, many Paris facades have more detailed information neatly inscribed on them: not only the date of the building, but also the name of the architect. The example above (at 18, rue de la Rochefoucauld) is not untypical, and although rather less decorative than many of its English counterparts, is certainly more informative. A view of the whole facade is below. 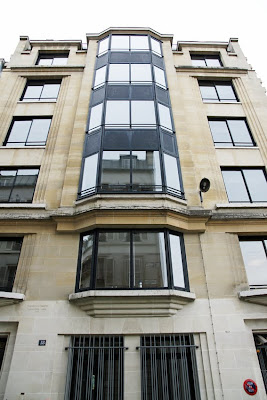 Louis Duhayon and Marcel Julien were associates who also worked together on the Arcades des Champs Elysées, now known as the Arcades du Lido. One of Paris's fine covered passages, this work is also in Art Deco style. It was built rather later than most passages; indeed the nineteenth-century enthusiasm for shopping in these glass-covered spaces had passed, hence the naming of this one as an arcade to distance itself from those old-fashioned predecessors. Styling it in the latest architectural fashion must have helped!

I like this French habit of giving details about architects, etc. There's a building in (I think) Wigmore Street that has a plaque attributing it to Sir Banister Fletcher, the architect and author the famous history of architecture. And Col. Seiffert (the Centrepoint man) used to 'sign' his buildings in a similar way.

Thank you very much for your article about the details about architects and the arcade. I will look out for both when I visit Paris soon!

This is probably amongst the last buildings to feature a date too. I'm not sure when exactly it went out fashion, but it's rare to see anything after about 1935 with a date on it.

What a shame it seems to have stopped, it's a wonderful idea. Philip, I'll have to look out for the British examples you mention.

Viola, have a good visit to Paris!

Don't miss an important name plaque on one of Deptford's own buildings. the Salvation Army Care And Share Shop has on the right hand 'grand pilaster' the name and date of the architect. The date is 1926 and the name Allison is given for the architect and the builder is also named. The big deal is that if you take a closer look, you'll see more glass behind the plywood boarding above and below the large plate glass windows, note the glass bricks, the manganese bronze trims and window frames, the terrazzo foyer and what we have is one of the earliest modernist/rationalist era shopfronts in the country. Allison travelled to Europe prior to this job. An earlier example of his work is the Ambassadors club off Oxford Street, is it Conduit street? opp. Vivienne Westwood? (yes we are all responsible for our own references!) The Ambassadors club rests much more within the art nouveau, and whilst the use of tiling here is the same tiling as Deptford, the composition he achieves in Deptford is definitively rationalist. Most modernism/rationalism in this country does not occur until the emigree architects such as Gropius, Chermayeff, Moro, Mendelsohn, so Piccadilly may have Simpson's 1936 (10 years later ) and Sloane Square has Peter Jones, Deptford can claim to be ahead of the curve just one year after the Paris exhibition of 1925 considered by the V&A to be inspirational in transforming shop design in the U.K.
http://www.vam.ac.uk/collections/architecture/past/shop/index.html