I've discussed ventilation for toilets and tube stations, but can't forget the sewage 'stench pipes' which also adorn our streets. Believe it or not, I'm not using the word 'adorn' sarcastically: some examples are even listed.

There's a stink pipe on Watson's Street, Deptford which has a moderately ornate base topped by a long, slender and plain pipe. It's pretty typical of the Victorian work of its manufacturer, Ham Baker. Indeed, this particular design seems to have been popular: Faded London has a very similar pipe in Jamaica Road.

Ham Baker are now based in the Midlands but some of their older metalwork calls them 'Ham Baker, Westminster'. Indeed, Frederic Ham was listed in 1905 as a member of the Institution of Mechanical Engineers; his firm's address was 13 Grosvenor Road, Westminster. They also made all sorts of other items including fire hydrants and manhole covers; still in existence today, they now specialise in "innovative products for the water and waste water markets", so the sewage aspects of the business seem to have stuck!

What was the purpose of such pipes? They offered an escape route for built-up gases, particularly hydrogen sulphide gas which was corrosive and could otherwise damage the sewers. (Again, Faded London has more information.) This was particularly important where the sewage was travelling long distances or the flow was slow. However, vital as venting the gases might be, nobody wanted to smell them as they escaped: hence the great height of these pipes.

Given their mundane, even unappetising, role it's a tribute to the nineteenth-century appreciation of engineering that these pipes nonetheless enjoy some ornamentation. Although disregarded or mistaken for broken lamp posts, they are in their quiet way monuments to Victorian civic pride. 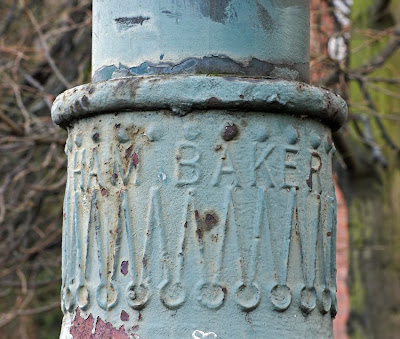 I really like these things. I'd always called them 'stink poles', a term I thought appropriately brief and Anglo-Saxon, although 'stench pipe' is more accurate. But if you look up such terms in the National Monuments Record thesaurus (it exists, I'm not joking) it snootily says, 'Use: Sewer Ventilation Pipe'. Heigh-ho.

As if it wasn't bad enough spending too much of the time when I'm around and about on the bike looking for fragments of ''faded London,'' you've now got me wondering: ''those stench pipes in Deptford Church Street, I wonder how ornate they are? Shall I take my camera with me?''

Hmm, a standard term would be handy but 'sewer ventilation pipe' lacks a certain snappiness! 'Stink poles' and 'stench pipes' are both more satisfying.

These do seem to be all over the place once you start looking for them. I'm not sure when I'll next be in Church Street, Marmoset, so I'd love it if you did take photos...

I wonder if any of them are snarfable...that is, grade I listed buildings. That would be kind of fun to find. :)

I never heard of such a thing before. Very cool!