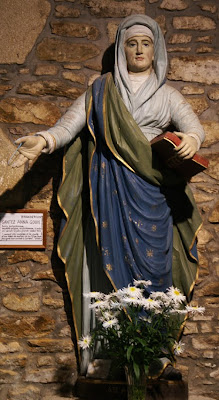 Branderion, a Breton village, has as its protector Saint Anne. She even has a nickname here: Santez Anna Gouh, or St Anne the Elder. Apt, because Branderion's chapel is claimed to be the oldest dedicated to her, with remains dating back to the 9th century, although the present building is mostly from the 14th.

There are two statues of Saint Anne in the simple chapel. One is of stone, but this more striking one is painted wood. It's also notable that she has a strong, mature face, in contrast to the insipid features of many such statues (the stone one in the same chapel is a good example).

According to a notice alongside it, the statue was sculpted in the eighteenth century in accordance with a vow made by Compagnie des Indes sailors shortly after their arrival at Lorient. That would make sense since she is, among other things, patron saint of shipwrecks.


St Anne - grandmother of Christ - has special significance for the Bretons, and is Brittany's patron saint. There are even legends suggesting (improbably!) that she was born in the region. In the seventeenth century, she famously appeared to the peasant Yves Nicolazic in a village since renamed Saint-Anne-d'Auray. He went on to dig up a statue of the saint, and a chapel was constructed on the site under his direction. Although Saint-Anne-d'Auray is not far from Branderion, and has somewhat overshadowed its own connections to the saint, the village must nonetheless be pleased to have the earlier claim.