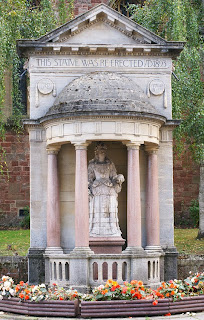 Back in the eighteenth century, Minehead had under 2,000 inhabitants but two MPs. One of these, Sir Jacob Bancks, presented this statue of Queen Anne to the town in 1719 (several years after he left Parliament). It originally stood in the parish church but was moved to its current location in 1893 under a canopy built specially for it.

Sir Jacob was Swedish by birth but later became an English national. He not only became a captain in the Royal Navy but also married into the Luttrells, a prominent local family. (His wife was the widow of Francis Luttrell of Dunster Castle.) Knighted in 1699, he continued as MP for Minehead until 1713. It is perhaps not coincidental that the statue was initially placed within a church whose living was in the gift of the Luttrells. (In other words, they effectively had the right to choose the vicar. Indeed, in 1858 it was in the gift of one Luttrell, Lord of the Manor, and held by another - Reverend - Luttrell.)

Despite his strong connections to Minehead, Bancks's estates were at Milton Abbas in Dorset and Hall Place in Berkshire. However, the statue has a strong London connection - what is it?