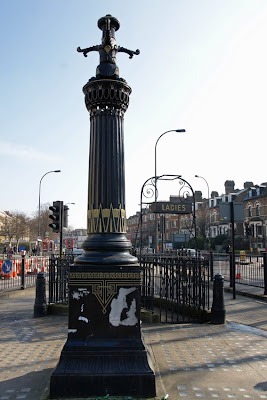 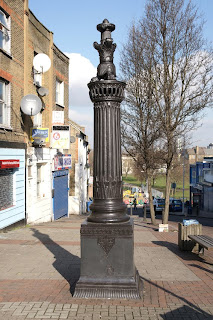 Among the most unnoticed or misunderstood pieces of street furniture, ventilation pipes are often not recognised by most passers-by. Indeed, sometimes careful efforts are made to disguise them. One of the best-known local examples is the former ventilation pipe for the underground toilets on the Kender Triangle, New Cross Road. For all its fresh paint and prominent position, this combined pipe and lampstand looks rather adrift. The toilets have been filled in and the light fitting which once topped the pipe has gone. It is in every sense redundant.

However, the story is likely to have a happy ending. As Transpontine explains, the pipe was listed thanks to the efforts of historian Jess Steele and others. It is special not only for its dual purpose and attractive design, but also because it is the only work of architect Alexander 'Greek' Thomson to survive in England, along with its sibling further east in Clifton Rise. Both come from Walter Macfarlane & Co's Saracen

Foundry in Glasgow, which we've previously met as a maker of bandstands and fountains. The second example also used to ventilate public toilets, now long gone, and both were installed in 1897.

Even more cunningly disguised ventilation can be found in the statue of James Henry Greathead, on Cornhill. He deserves a post in his own right, but for the moment we're just concerned with the plinth. It's carefully shaped to fit the limited plot available, and with space at such a premium here in the heart of the City, it has been made to serve a double purpose. Ventilation is provided for Bank station below, thanks to the plinth being a pipe with air vents in the statue's iron base. Greathead, as an engineer himself, would probably have approved the ingenuity.