More famed for its post-war buildings, Croydon also boasts some Victorian gems. That's not really surprising: the town had become something of a transport hub at the beginning of the nineteenth century, first as a stagecoach halt for those travelling to fashionable Brighton and then thanks to the Croydon branch of the Grand Surrey Canal, later reused for a railway line. Only minutes by train from central London, Croydon was popular with Victorian commuters as well as a growing industrial centre in its own right.

My visit was cut short by a vigorous shower of sleet, but I'd already come across a number of enjoyable features. Just along from the Whitgift Shopping Centre are the wonderful facades of its Victorian predecessors: 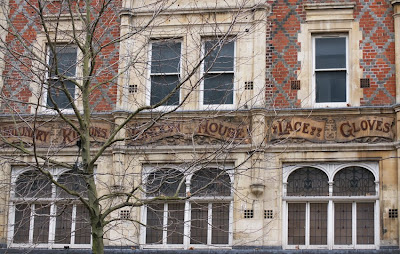 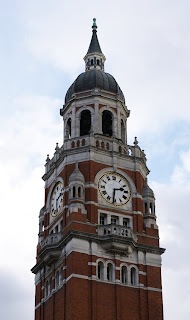 The Croydon Clocktower, built in the 1890s as a library and town hall, is also richly detailed. (Pevsner summarised it as 'not a bad design even if debased in most details', which seems unkind, although it certainly is a little cluttered with carvings.)

Panels illustrate Health, Recreation, Study, Religion and Music. Ornamental Passions has much more information about the building's decoration here. I particularly liked Health's focus upon clean water and sewage: Croydon formed its Board of Health as early as 1849 and was the first town to install an integrated water supply and sewage system in 1851 (not altogether successfully, as several typhoid outbreaks followed). 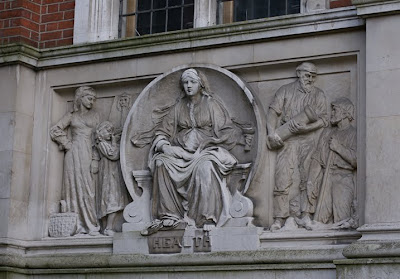 Thanks for this. Wonderful pictures, I adore old Victorian signs.