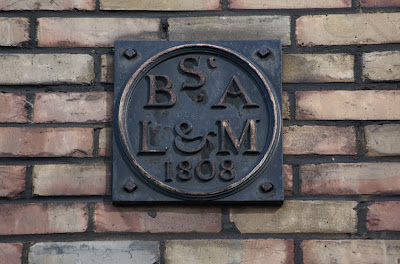 More evidence that it's always worth looking up in London: this parish marker is above the otherwise uninspiring Costcutter opposite Aldgate station. It marks the border of St Botolph Aldgate; looking through lists of London parishes, I haven't managed to work out 'L&M' but suspect I'm missing something obvious! 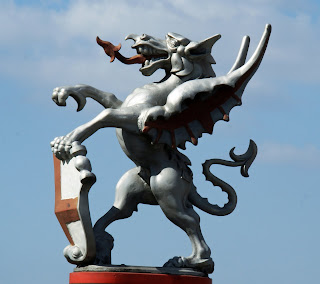 As the name (meaning 'old gate') suggests, Aldgate is on the boundary of the City of London and indeed was the site of one of its city gates. Today, the gate is long gone but a City dragon protects his domain.

I was in Aldgate in the hope of seeing another boundary marker, though: one of Ronzo's 'Pity of London' sculptures. These alternatives to the dragon are topped by Crunchy the Credit Crunch Monster and have been erected by the artist to celebrate the end of the credit crunch. Sadly, Aldgate's Crunchy was gone by Sunday morning - taken either by collectors or by offended City of London officials - but the film below records its time welcoming those passing between the City and the east end.

Ronzo's Pity of London - Part 2 from Ronzo on Vimeo.

Psst: if it's near Aldgate station, it's St Botolph (Without) Aldgate (and Holy Trinity Minories), not St Botolph Aldersgate (yes, there are two parishes with such similar names).

I think L&M is the ultra-obvious: it's the border between London and Middlesex. If I've got the parish boundaries right in my head, the neighbouring parish there has always been Whitechapel.

Agh, my fingers got ahead of my brain there! Now corrected to Aldgate.

It is indeed Whitechapel next door. I think you must be right about London & Middlesex, it just seemed odd to have that rather than the neighbouring parish. Perhaps the City of London being too sniffy to acknowledge its East End neighbour...