The recently-reopened Whitechapel Art Gallery is now topped by a fine weathervane depicting Erasmus on horseback. It's sat on the extension to the gallery, the former Passmore Edwards Library - whose original plans had included a weathervane, never actually added. 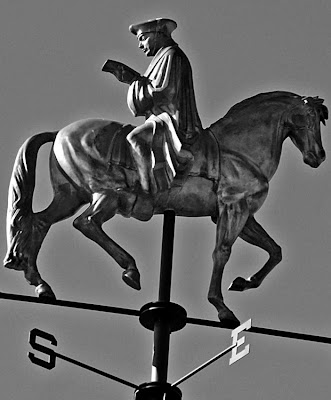 The new feature was sculpted by a Canadian artist, Rodney Graham; its mounted figure is a self-portrait dressed as Erasmus. This was inspired by the story that Erasmus wrote The Praise of Folly while riding on horseback from Italy to England. (Alternatively, and more probably, it was written at Sir Thomas More's estate.) While the reading theme may appear apt for a former library, apparently it's actually a phonebook.

Phew, I was indeed wondering where it was from.