Yesterday I focussed on the lovely sign for St James's Cottage. Today, here's the cottage in all its glory, along with some neighbours. The whole terrace is listed as a group; the Cottage is the earliest building (1827), its neighbours having joined it between 1828 and 1830. They were then known as St James's Place.

This area had begun to see development in the eighteenth century, when the road's condition was improved under the management of the New Cross Turnpike Trust. That made it an easy commute into central London, although the area remained primarily one of market gardens. In the 1820s, though, demand for housing in the capital made land more profitable when used for construction and the rate of development increased. St James's Place is one of the results. 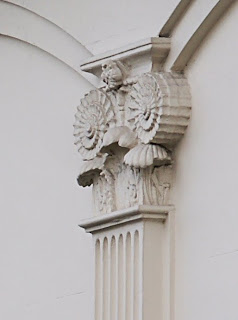 Across the road are the lovely Carlton Cottages, from the same period. Built in 1829, the curving details on their facades are eye-catching but what makes them particularly distinctive are the ammonite capitals topping their pilasters.

This design had been created by George Dance in London in 1789, and became popular in Brighton at the beginning of the nineteenth century when local architects Amon Wilds and his son Amon Henry Wilds used it in several buildings. Presumably the reference to their own name appealed, and the fact that one of the first occupants of those Brighton houses was a geologist made it particularly apt. There is some speculation that Carlton Cottages may be the work of those same Brighton architects; certainly, in the late 1820s Amon Henry Wilds' practice extended far beyond Brighton.

Thank you for a peek at the cottage. It looks very familiar, but it has been a while since I lived down that way.

Super stuff. I am finding the development of old park or marketgarden land into housing a very interesting process.

Who would have commissioned these buildings in the 1820s? And who was their target buying or renting market? The houses look quite substantial, don't they?

Hels, I don't know who the original residents were but in the 1850s they included a builder. They certainly would have been for the comfortably-off who could afford not only a rather nice home but also (for many residents) the commute into the city.

Hi ,
I nearly bought one of these lovely cottages around 1980 through the GLC " homesteaders" scheme.
I was advised against purchase by our surveyor because of the high cost of repair , shame but no regrets ! It needed a whole lot of expensive repairs. It had lovely fireplaces and folding doors which acted as room dividers.
My understanding was that it was the work of the Brighton builder Amon . There is more of his work in Brighton which I have seen featuring " Amonite Capitals "
Tony.