Here's a battered but originally rather fine piece of street furniture which I noticed on Commercial Road, E1. Initially I thought it was a stink pipe, but the bars at the top and the holes in the post suggest it might have been a gas lamp post. If anyone is certain of the answer I'd be very grateful to find out!

Why do a pair of horizontal bars suggest a gas lamp? Well, since the lamps required lighting every evening, someone had to climb up to do it. Obviously, a narrow cylinder isn't the most stable of ladder supports so the bars at the top provided a safe anchor point over which to hook the ladder.

The detail around the bottom isn't very sharp, thanks to repainting. However, there's an image of a building which could be the Tower of London and the letters 'BW'. 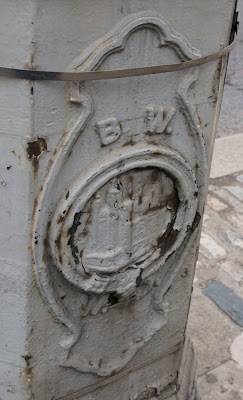