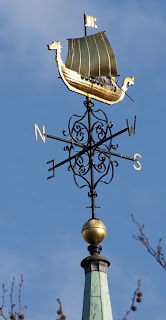 In our haste to climb down into the Thames Tunnel, I suspect that many of Rotherhithe's visitors last weekend didn't pay a lot of attention to the features above-ground. However, the small area of Rotherhithe Village is dense with history; here are a few highlights.

An area with a rich maritime past, it has strong Scandinavian connections. Nowhere are these more visible than on the windvane of St Olav's, the Norwegian church.

The most famous maritime link is with the Mayflower. This ship, taking the first British settlers to North America in 1620, set sail from here to Southampton. There, both supplies and pilgrim fathers were taken on board. The connection is best marked by the pub of the same name; although it's on the site from which the ship departed, the current building 'only' dates from the eighteenth century. 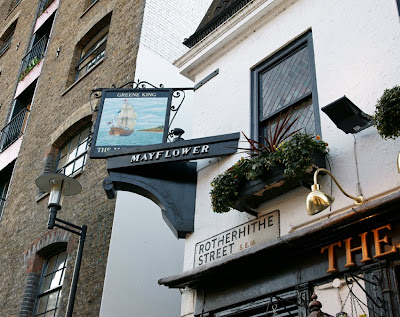 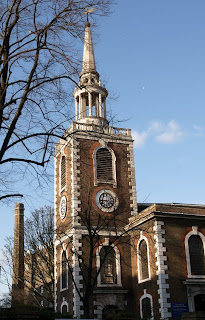 Across the road from the pub is St Mary's Rotherhithe. This church was built in the eighteenth century by John James, an associate of Sir Christopher Wren.

Perhaps the most interesting burial in the churchyard is that of Prince Lee Boo, who came to London from the Palau Islands in the Pacific. Rotherhithe man Captain Wilson was shipwrecked on the islands, and quickly established friendly relations with the local people. Wilson and his crew built a new ship on the island and, impressed by what he had seen, the chief sent his younger son Lee Boo back to England with them. 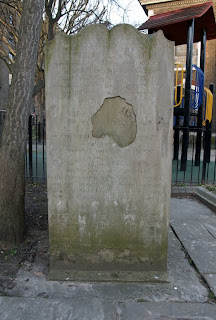 Although he began his English education in a local school, within a few months he contracted smallpox. Lee Boo was living with the Wilson family and attended St Mary's with them; when he fell ill they called in one of London's best doctors. However, Lee Boo could not be saved and was buried in the Wilsons' family tomb.

Facing the church is a charity school built in 1703. Although the teachers and pupils have long gone, two figures still stand on the facade, proudly modelling their uniforms. 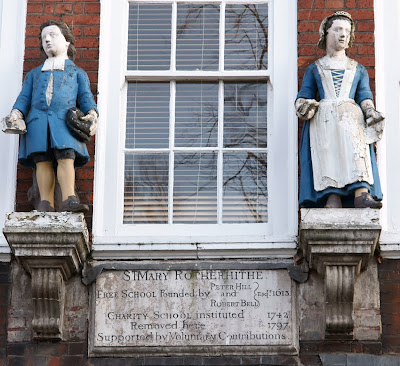 Leaning up against the school building is the former watch house. This tiny building was the base for the town's beadle, constable and 14 watchmen; there were even cells in the basement. When the Metropolitan Police were formed in 1829, just 8 years after this watch house was built, it was closed. 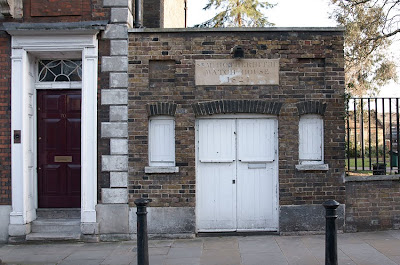 Thanks for this, I have always had a fascination of Rotherhithe.

I can understand that: this was my first proper visit, and it's an amazing place.

It's probably one of my favourite parts of the path between Deptford and Tower Bridge, even though there are many highlights!

Many thanks, Caroline. Was once taken on a tour of the area by someone who knew it well: fascinating (esp as this was before all the the riverine redevelopment had got underway).

I was brought up on the Adams gardens estate and just took these features for granted. I suppose I got used to my surroundings and didn't realise how privileged I was living in an area steeped in history.
Thanks for this!

Wow, I lived in the Adams Gardens Estate for years and used to look at all these things all the time but never knew the history. Thank you, so interesting.