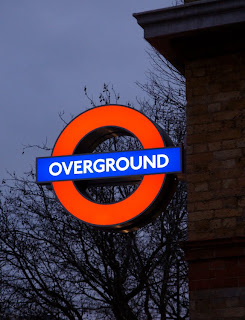 I've written about the Thames Tunnel before, but couldn't resist updating the post after walking through on a guided tour this weekend. It was a unique opportunity to explore on foot, thanks to the hiatus between its use as part of the East London Line and its reopening and rebranding within (ironically) London Overground.

It's far from the first change of use for the Thames Tunnel, which runs between Wapping and Rotherhithe. It was never used for its original purpose: when Isambard Kingdom Brunel’s father Marc proposed the tunnel it was to be a convenient way of transporting cargo across the Thames. 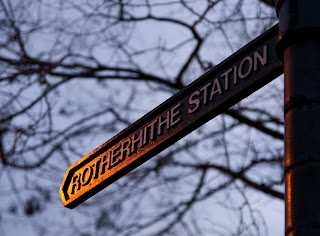 In the nineteenth century, the Port of London was at its height and ships had to queue for berths. As well as the problem of delays, there was another difficulty: if the ship moored south of the river and its cargo was destined for the north bank, or vice versa, it all had to be transported slowly overground along the riverside, across hectic London Bridge and back down the opposite bank. The suggested solution: a tunnel allowing horses and carts to quickly pass from one side of the river to the other. 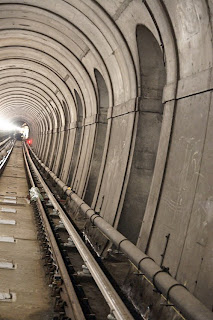 Brunel’s tunnel was an engineering marvel, the first to be built under a navigable river. Brick shafts were built above ground and sank into place under their own weight (although the first required a little help from a very big pile of bricks; Brunel learned from this and tapered the second so it sank all the way unassisted.) The tunnel then extended between the shafts and under the Thames. It required the invention of a new tunnelling technique, the tunnel shield, which provides support as each new section is built. (Previous tunnels tended to be ‘cut and cover’, where a big trench was dug and then roofed over – the unsuitability of this for tunnelling under a river is obvious!). Even with such revolutionary techniques, the tunnel took 18 years to build and was only completed in 1843. 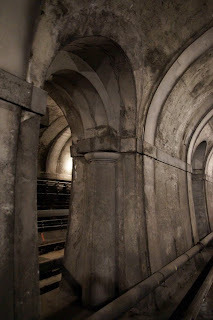 However, as is often the way with such grandiose projects (think Millennium Dome), things went rather wrong. Money ran out, and although there were stairs down to the tunnel, the ramps for horses were never built. Instead the tunnel became a pedestrian attraction. There were under-river banquets, a shopping arcade, and even fairs. Stallholders stood in the archways dividing the two halves (today, the two rail lines). Souvenirs were sold, some of which can be seen at the fascinating Brunel Museum by the tunnel’s Rotherhithe entrance. However, over time it came to attract dodgy characters and declined in popularity.

Eventually, in 1869, the tunnel became part of the new East London Railway and was closed to pedestrians. It would only be reopened this weekend, after over 140 years, and the excitement Londoners felt at the opportunity to walk under the Thames can't have been too dissimilar to that of the Victorians. 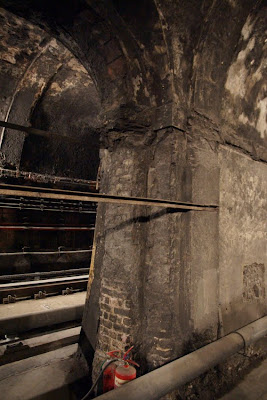 As a pedestrian, it was possible to make out features that couldn't really be spotted from the train. These include some original brick arches, left uncovered when the rest of the tunnel was coated in concrete in the 1990s. While the crumbling state of the brick explains why such covering was felt necessary, it's good to be able to see these originals too - thanks to campaigning by English Heritage and New Civil Engineer magazine.*

There are also contemporary features on view. I tried not to get too carried away snapping bits of cable and random signs, but a few sneaked through. Well, it could be another 140 years before I get the chance to wander this way again... 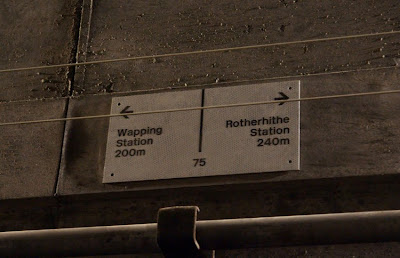 Other bloggers who made the same walk include IanVisits, 853, the Great Wen and Diamond Geezer.

It was a terrific weekend, especially the walks. Shame to think we are the last members of public to do this.

It is a shame - although it did also add to the excitement of the weekend.

When did you do the walk? There were people in Victorian clothes on my tour, which really added to the ambience.