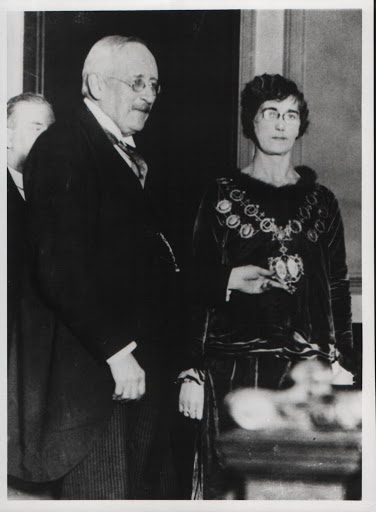 In 1918, women over thirty were allowed both to vote and to stand for election nationally at last. However, women already had a history of service at local level: they had been able to stand for Borough and County Council elections since 1906 and had been members of various boards long before that.

Deptford Labour Party member Beatrice Drapper had served for some years on the Greenwich Board of Guardians, providing relief to the poor, before she became a local councillor in the 1919 elections. She would continue to serve in this capacity until 1956, chairing various committees including the Maternity and Child Welfare Committee; in 1927, she became the Borough's first woman mayor. Only one man, 'a bachelor', opposed the election of a woman to the position.

Sometimes, contemporary accounts can obscure as much as they reveal, particularly given the controversies surrounding women's achievements at this period. Note the way that this American newspaper report, in the Pittsburgh Press of 16 August 1928, is more interested in Drapper's husband than the fact that she is a mayor:


Mrs. Beatrice Drapper, wife of a New Cross, Eng[land], dairyman, is to be presented at the first court of the season at Buckingham palace. She will be presented by Lady Joynson-Hicks wife of the home secretary. Mrs. Dapper is mayor of Deptford and chairman of the Greenwich and Deptford board of guardians and is the first woman to occupy these positions. She has just completed 21 years service as a guardian. [Uneven capitalisation in the original]


In her book British Women in the Twentieth Century, Elsie M Lang intertwines an account of Drapper's political achievements with a fashion commentary. (Writing in 1929, when women's political and professional gains were still so new, she was eager to emphasise that success need not mean a loss of femininity.) Thus we learn not only that she attended the Lady Mayor of Liverpool's lunch for women mayors, and that evening was the only woman at the Lord Mayor of London's banquet, but also that she caused a stir in Deptford ('that somewhat dingy locality') in her blue velvet robe, while she wore a striking silver dress to be presented at court. Thankfully, Lang manages to turn from sartorial matters long enough to list some of this impressive woman's other achievements: she was a former swimming and gymnastics instructor, chairman of the Greenwich Board of Guardians, a JP and a member of the National Food Council.

Returning, however, to that lunch for women mayors, Pathe News footage of it survives. The mayors of Southampton, Pudsey, Tenby, West Bromwich, Eastbourne, Whitehaven, Deptford, Lichfield and Wrexham are shown being entertained by Margaret Bevan, Lord Mayor of Liverpool.

Drapper would later be a founder of the NUCO Guild of Nurses. Established in 1937, it campaigned for better conditions for general nurses (by contrast, the Royal College of Nursing feared that better pay would attract the 'wrong sort' to the profession). The Guild's methods were direct and confrontational, including street demonstrations and the disruption of meetings. Such activism surely gives us more insight into the sort of woman who could lead Deptford Council than the picture of her 'naive' delight in her court dress.

The Qualification of Women (County and Borough Councils) Act 1907 allowed women to stand for election to councils.

I think you are perhaps mistaken in describing Beatrice as naive. She spent many years being either the only woman or one of only a few women on committees. If at a formal event she wore the most stunning dress it would have been because she wanted to be the centre of attention.

I have just posted the complete list of Deptford's Mayors. Apart from Beatrice Drapper and Doris Burley three other women held the office: Alice Ott, Mary Chrisp and Florence Dolby.

Bill, the whole point of my last paragraph was that as you say, she was not the naive clothes-lover Lang portrayed! There were perhaps understandable political reasons for Lang's approach, of course.

You're right about the 1907 Act - a stupid error. I'll correct the introduction. Thank you for the full list of Deptford mayors!