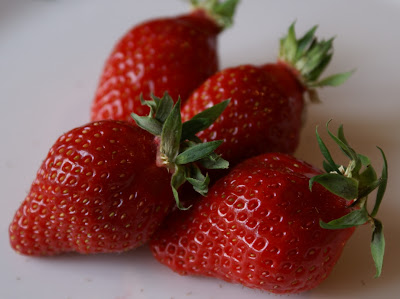 Now that the sun seems to have disappeared again, here's a reminder of summer treats to come: strawberries. These are rather special ones too, coming from Plougastel in Brittany. Their renown was such that in the nineteenth century they were sent by boat to England and by train to Paris.
The cultivated strawberry is a surprisingly recent addition to our summer diet: naval engineer Amédée François Frézier brought its ancestors from Chile to France in the eighteenth century. He was part of an expedition to spy on Spanish ports, but found time to discover the 'blanche de Chile' (Chile white) strawberry.

These exotic plants were given to the royal gardens and the botanical garden in Brest before reaching the Plougastel peninsula. The local climate is especially suited to their cultivation, similar to their native weather. However, the fruit were originally white: only after the plant was crossed with a native strawberry was the large red fruit we're familiar with created. Thus Plougastel is the historic home of the cultivated strawberry, and was until the Second World War one of its major producers.

Although Plougastel lost its pre-eminence in the twentieth century, its fruit are still famous in the region and there is even a strawberry museum.

The strawberries are tasteless in Australia. How I wish that I could eat some of your lovely English strawberries!