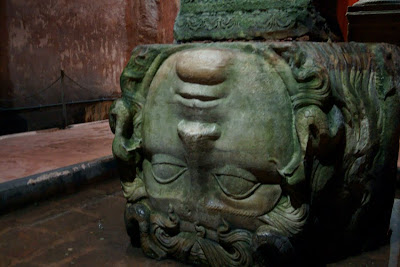 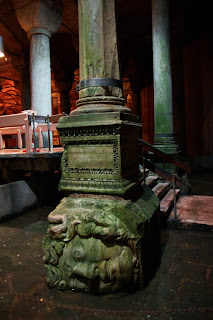 Most of us are familiar with the image of the Gorgon Medusa, her hair made of snakes and a gaze which turned men to stone. However, she also had a protective role, in which guise she can be found in Istanbul's Basilica Cistern.

Istanbul, then Constantinople. spent a lot of time under siege so a good water supply was vital. Aqueducts brought it from the nearby Forest of Belgrade, and it was stored in huge underground cisterns from which it could be piped to fountains throughout the city. The largest of these underground reservoirs was the Basilica Cistern, which dates from the Emperor Justinian's rule in the sixth century.

It is now accessible to visitors and a major tourist attraction. There are over 300 columns, some clearly borrowed from other structures: the Medusas fall into that category of reused stonework. In its north-west corner are two Medusa's heads, one carefully placed on its side and the other upside-down. According to popular mythology, thus turning the heads ensured that they would avert evil rather than bring it.

Email ThisBlogThis!Share to TwitterShare to FacebookShare to Pinterest
Labels: myths and legends, statue

Magical place this. When I visited there was a Turkish male-voice choir singing in it. The acoustics were terrible really - much too many echoes - but the overall effect of reverberating sound was still impressive, and rather otherworldly. (Quite unlike Turkish military band music which, if the sample I heard was anything to go by, is clearly intended to quell the enemy by making them roll about with laughter.)