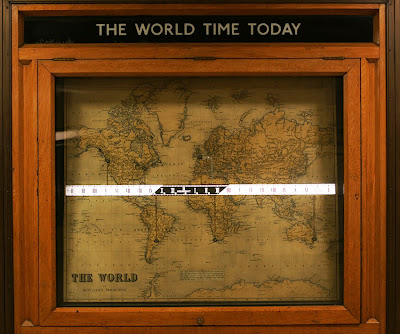 Although I've used Piccadilly Circus tube station for years, I'd never been quite far enough round to notice its world clock, so thanks to Tired of London for pointing it out.

The station was opened in 1906 and refurbished in 1925-28 by architect Charles Holden. Part of the updating was the installation of this clock with its band moving to indicate the time around the globe. It shows solar time, and is thus not entirely accurate as an international clock since time zones only broadly follow longitude.

Holden has left his mark on many Piccadilly Line stations. However, this clock must be among the most satisfying details he included.