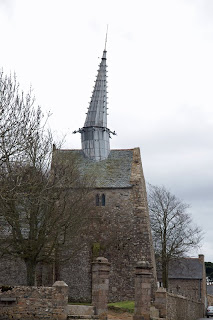 This chapel near Brittany's north coast is remarkable for its spire: the lower part leans in one direction, the upper part even more severely in another. Apparently it's the weight of the lead which originally caused the distortion: when the spire was added in the seventeenth century, it was simply too heavy for the much older base. The villagers have become so attached to the unusual shape, though, that during restoration in the nineteenth century it was carefully preserved.

The chapel is dedicated to Saint Gonery, a British hermit who travelled over to Brittany to evangelise its inhabitants. He lived in profound solitude in the village during the sixth century; his tomb and relics remain there.
- April 05, 2010

i wanted to go inside, but every time i was in the neighbourhood, it wasn't one of the few days of the month when it was open...

Still, the towns people don't seem to mind non-natives standing in the middle of the main street taking photos of their cute church...

It wasn't open yesterday, either - not even one of those signs saying where the key is. But as you say, they're very tolerant of photographers!