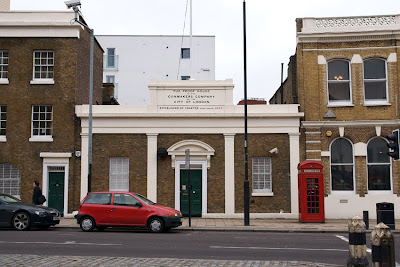 On Commercial Road, E1 is a rather curious-looking little building, out of scale with the structures surrounding it. An inscription rises above the facade:

THE PROOF HOUSE OF THE GUNMAKERS COMPANY OF THE CITY OF LONDON.
ESTABLISHED BY CHARTER ANNO DOMINI 1637.

I'd assumed that it had probably been converted into offices, or even flats, long since but the Gunmakers' Company website confirms that it is indeed still a proof house. So what does it do? 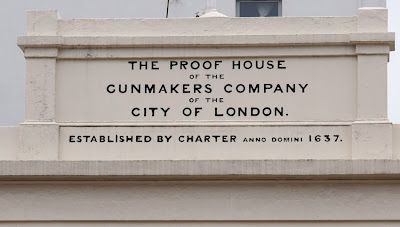 Well, it's clearly something best kept outside the City: why else would one of the City of London companies have premises outside the city walls? Sure enough, it is a place where guns are tested - and the less reliable weapons of earlier years could be dangerous to more than their target. The current building of 1757 replaces one damaged by repeated explosions.

By law, all gun barrels have to be tested; they also have to be retested after undergoing structural modifications. This is done in three stages: first, there is a physical examination which includes measuring and gauging the barrels. Then the gun is fired, using a special cartridge to generate more pressure than should be experienced in normal use. Given the as-yet unproven state of the weapon, it's reassuring to read that it is fired remotely in a closed chamber! The bullet is caught in a 'snail', a hardened steel spiral. Finally, provided that it has passed these tests, the gun receives a proof mark.

There is one other Proof House in England, in Birmingham. It was established in 1813 and also continues to operate today, as well as having a museum open to the public.

I've walked past here a hundred times and had no idea that this is what it is. Thanks so much for sharing!

I can see why the guns used to receive a proof mark, but why now? Are guns allowed in the general population in Britain now?

Nice to see a classic red phone box alongside too!

Thank you, Mark and Adam. It was very obliging of them to make sure the car in front matched the phone box, too!

mott, apparently they're busier than ever. Guns are allowed and always have been - farmers and others have shotguns, lots of people shoot as a sport, etc. (All subject to licensing, strict rules on storage, and so on.) In addition, the Proof House tests military weapons (the larger ones on MoD ranges rather than in central London, thankfully!)