Dying days of the Heygate 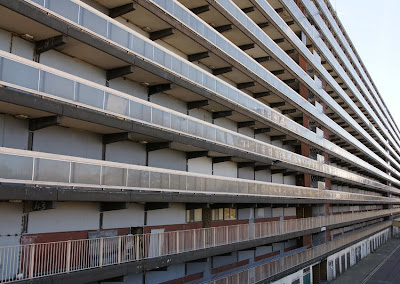 It was built in the early 1970s; less than forty years later, it's due for demolition. This block of flats on the New Kent Road is part of the Heygate estate, and will be knocked down under the Elephant & Castle regeneration plan.

Passing regularly on the bus, I've seen more and more flats swap curtains and painted doors for blank metal plates. As of January, only 100 of the 1,100 homes on the estate were still occupied. Heating and hot water were turned off a few weeks ago, demolition is beginning.

The process of decanting tenants has not been unproblematic or uncontroversial. Many had no choice but to leave the area altogether (meanwhile, the nearby Strata building has hundreds of flats, average cost £500,000; only twenty of them were reserved for rehousing Heygate residents). Underlying the process is the question facing many such areas: does regeneration mean improving living conditions for those already there, or gentrification to attract more middle-class residents?

Are those newly homeless residents offered alternative homes, of at least the same standard as the homes they already had? And in comparable areas, where they know the streets, facilities, businesses and their neighbours?

If not, where do they go?

They apply for homes through the council's allocation system, and are given a high priority because their current home is being demolished - but some of the links are to articles about tenants who have had problems getting a suitable new home.

The homes are in the same borough, but not necessarily in the same or a particularly nearby area.