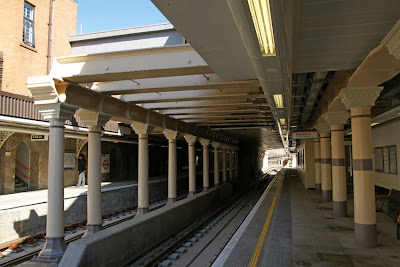 The East London Line, just before it splits between New Cross and New Cross Gate, stops at Surrey Quays. One glance at the station interior makes it obvious that this predates London Overground by quite some time. Indeed, it opened in 1869 as part of the East London Railway, predecessor of the ELL.

You won't find the name 'Surrey Quays' on Victorian maps or timetables: the station was originally Deptford Road. The Surrey Commercial Docks were a few steps away, so the name was changed to Surrey Docks in 1911.

Docks were first established in this part of Rotherhithe to take 'overspill' from Deptford Dockyard, but they grew into an enormous complex receiving ships from all over the world (as names like Canada and Greenland testify). The dockers working here included specialist deal porters. These men carried huge loads of rough timber (deal or pine) imported from the Baltics, and wore special leather hats with a flap extending over their shoulders to protect themselves. However, the weight and splinters were not the only challenge they faced: since the wood was stacked up to 60 feet high, they had to carry the baulks of timber as they balanced on planks high above the ground. Hard and dangerous as the work might be, it also offered permanent employment (in contrast to the casual labouring endured by many dockers) and jobs were passed down through families. 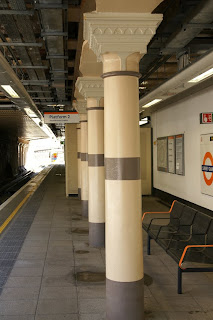 In the Second World War, the docks suffered heavy bombing. The South Dock was also dried out and used for constructing concrete caissons which formed part of the D-Day Mulberry Harbours. After the war, there was some recovery but containerisation was the final blow: the docks closed in 1969. The final indignity was the change of station name to 'Surrey Quays', prompted by the opening of Surrey Quays Shopping Centre in 1989.

The surviving Victorian details now look slightly random, especially the suddenly-truncated row of columns in the centre. However, they add both character and a reminder that this area has a history which long predates the shopping centre and News International premises now outside.

Thanks for the history, interesting as usual. I'd have guessed the left-hand row of columns was some sort of postmodernist joke if I'd not, in my time, travelled through this station. Never got off there, though.

Interesting question, Trainman. The local community did shrink: there was a 16% fall in Southwark's population for the decade from 1961 (and presumably it shrunk further in the next decade or so). Since the redevelopments from the 1980s onwards, though, the population has been growing fast.

I remember Surrey Docks features in a Jimmy Somerville video, i thought it was small town boy, just looked but couldn't see it.