On Saturday, I joined the British Postal Museum & Archive for a walking tour of London's Post Office heritage. As well as the locations visited, the tour provided a lot of insight into the street furniture all around us.

First, though, when did Britain's postal service begin? If your answer includes 1840, Sir Rowland Hill or the Penny Black then I'm afraid you get nul points - the service is actually much older than that. In 1643 the first General Post Office was established, complete with Postmaster General. It was tiny compared with the modern service: in London, letters could only be posted in one place - Lombard Street - and the service had only 316 employees across the whole country. Nonetheless, it made some important innovations, not least the first postmark in the world struck in 1661. 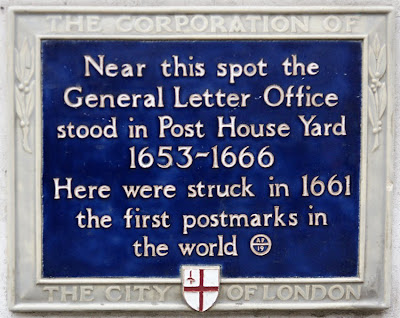 So what was all the fuss about Rowland Hill and the Penny Black? Quite simply, he revolutionised the postal system. Until then, postage was calculated by a combination of number of pages and distance travelled and was paid by the recipient. It was expensive, the cost was somewhat unpredictable, and of course the recipient might simply refuse to pay and reject the letter at the end. Hill's brainwave was to charge a single fee, one penny, to be 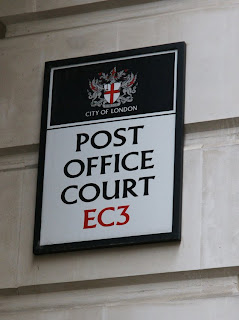 paid in advance by the sender. In order to show that the penny had been paid, it was decided that a gummed rectangle of paper should be affixed to the envelope: a postage stamp. The first such penny stamp was the famous Penny Black.

To help with delivery, London was divided into postal districts in 1855. These were further sub-divided with numbers during the First World War, to help improve efficiency. Such innovations are very much a part of our streetscape, still present on every road sign. 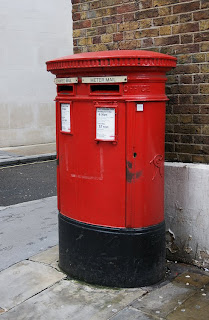 Even more obvious, of course, is the post box. Introduced in the mid-nineteenth century, they're generally red with the reigning monarch's initials on the front. However, it's all a little more complicated than that. To give just a few examples, some Victorian boxes had the insignia on the side rather than the front (and when doors were replaced they generally had the initials of the current monarch so can be misleading - or even unmatched on the same box).

George V was the first King George to have postboxes. He settled for a plainer-than-usual monogram which didn't include the 'V', so the casual observer wouldn't know precisly which monarch this box relates to. George VI went back to the more florid design complete with 'VI' for clarity. (This example is painted black rather than red to show that it is no longer in use.) 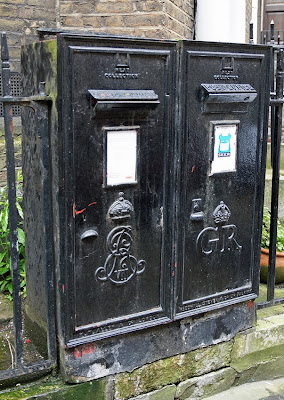 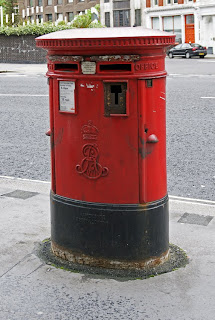 The double boxes are very common in London, originally divided into London and other mail, then first and second class, and most recently stamped and meter mail. Today the division doesn't actually matter, but the greater capacity of the double-width design remains useful.

By the end of the walk, our eyes had been opened to the history standing on our streets. We also understood just how much the Post Office had shaped London: indeed, the area around Postman's Park was so dominated by the institution that today's St Paul's underground station was originally named Post Office.

The tour was part of the London 2010 Festival of Stamps. Until next Saturday, you can also visit the International Stamp Exhibition at the Business Design Centre, Upper Street (admission free). At the Guildhall Art Gallery, Empire Mail: George V and the GPO runs until 25 July.

"History" as it used to be taught at unis (I was there in the middle 1960s.. things may have changed since) was what was written in official chronicles. Or court files, contracts, family letters etc etc.

But I love your blog Post Office Heritage because it shows we can glean great historical information from images, letter boxes, public telephone boxes, stamps, postmarks and anything else we care to examine carefully.