It's possible to take a free boat trip on the Thames: head down to the Woolwich Ferry which will take you between Woolwich on the south bank and North Woolwich on the, er, north. The crossing is short, and shared with cars and lorries on the upper deck, but slightly more scenic than you 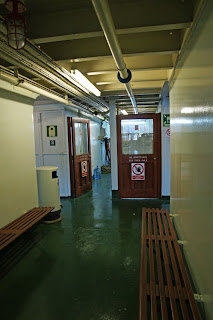 might expect with views across to the Thames Barrier as well as the more industrial riverscape to its east.

There have been ferry services at Woolwich since the 14th century, but the current service traces its history to the 1880s. Local residents were pretty fed up: a ferry service established by Act of Parliament had gone bust in 1844 and the nearest bridge was Tower Bridge some way to the west. Their rates had helped to pay for more westerly bridges, but they couldn't afford to set up a crossing for themselves. The Metropolitan Board of Works under Bazalgette was persuaded by their arguments, and in 1884 it agreed to provide a free ferry. The service launched in 1889 and has been running ever since. (In the following decades, the Woolwich Foot Tunnel and Blackwall Tunnel would also be built.) 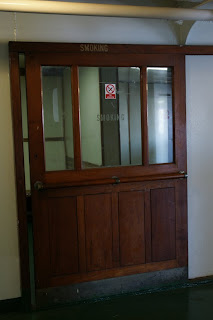 Originally there was only one boat, so the crowds who flocked to Woolwich on the opening weekend (about 25,000 arrived by train) must have faced long queues and busy boats. They got to ride by paddle steamer, only replaced by motor ships in 1963. Features on the lower deck such as a smoking lounge suggest that the interiors haven't been substantially altered since; facilities are fairly basic, with bench seating, but then the crossing is only five minutes long. At either end, the ferries are loaded and unloaded via hinged ramps operated by hoist towers so that the rising and falling tides can be accommodated.

Although I didn't share my crossings with more than a handful of other foot passengers, there were plenty of vehicles on the upper deck. Indeed, more than one million vehicles are transported across the river every year at a cost of just over £7 million. The crossing continues to be an important part of London's infrastructure, then, with the main threat to its future - the proposed Thames Gateway Bridge - looking more and more improbable. 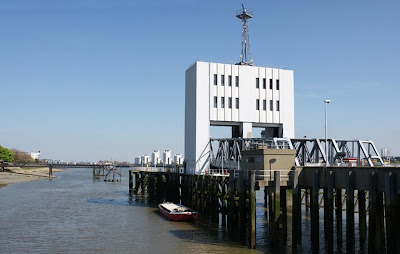 Explore further: this website by John King has huge amounts of information and photographs. BBC News have a nice report on the service here.

Fun, isn't it? Remember taking the trip as part of research into a vidscript on the Barrier for Thames Water (then i/c). Long may the ferry continue: there's plentiful scope for using the Thames for traffic, and it is at least arguable that it should be more fully exploited.

The best way to do it is on a bike. You stay on the top deck and they let you off first! Then they let the lorries loose...but there's not a lot of places where bikes take priority.

It is fun - although it does sound like a bike crossing would be even better! However, I'm far too cowardly to cycle around London (not to mention unfit...)

From the Greenwich Foot tunnel it's about a 10 mile, nearly all traffic free round trip, with virtually no hills. Plus there are strategically placed recovery points - about half way along the north bank there's the Thames Barrier North Café (the park's well worth a look around), you get a breather while the ferry takes you over, and on the south bank return trip there's the Thames Barrier Café's southern sister which it would be a shame to miss.