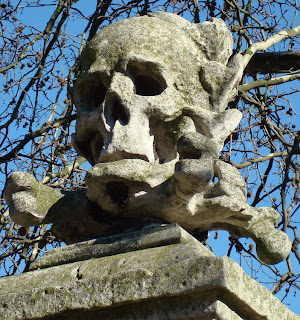 St Nicholas' Church, Deptford is probably best-known for the rather magnificent skulls on its gateposts. They are rumoured (probably incorrectly, alas) to have inspired the pirates' Jolly Roger. Grim to modern eyes, they were nonetheless designed to offer hope since they are wreathed in laurel, symbolising eternal life.

The macabre symbols are not confined to the gateway: there are plenty more skulls inside the church. Indeed, a small selection of St Nicholas' skulls gives some idea of the range of meanings they could have in this context. 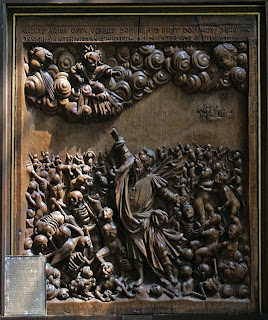 Some rather special ones are to be found in the Grinling Gibbons panel, The Valley of the Dry Bones. Gibbons, one of the greatest woodcarvers, lived in Deptford before he gained the patronage of Wren and the royals. That perhaps explains how he came to carve this oak panel for the church.

It depicts an Old Testament scene, the prophet Ezekiel's vision of a valley full of dry bones brought back to life by God. This work was originally above the charnel house door in the churchyard but has been in the church itself for the last century or so. 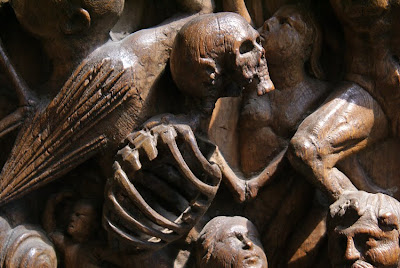 While Gibbons' skulls were coming back to life, those on the memorial to Katherine (or Katherin) Wivell serve as a memento mori. Such reminders of our mortality were intended to spur the viewer into leading a better life, newly aware that the final judgement might not be far away. According to the inscription, Katherine herself need have no fears on that account:

Much lemented by all that knew her A woman whos piety beauty & Virtue none Excel'd. 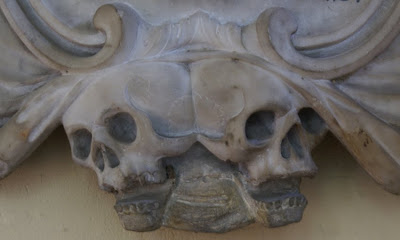 Katherine was the wife and daughter of sea captains, both apparently reasonably wealthy. When the young Katherine Gunman married Francis Wivell in 1693, her widowed mother and Francis agreed to pay £1,000 each to be settled upon her. (This was a way of giving married women, who could not own property of their own, an independent income. The settlement would not allow her to spend the capital.)

Katherine's father Christopher Gunman had died eight years before her marriage, after a successful naval career. In 1663 he had commanded HMS Oxford on voyages to Lagos and Tangier. There followed several years of cruising the Bonadventure around Tangier and Algiers, before spending some years sailing closer to home. He took command of the Duke of York's yacht in 1669, and his career progressed steadily until he was involved in the wreck of the Gloucester in 1682. However, the Duke of York intervened on his behalf to revoke the sentence of the court martial and Gunman was soon back in command of the Duke's yacht.

Katherine may have lived in comfortable circumstances, but her life was not long and was marked by tragedy. She died aged 39 in 1713, leaving a husband, son and daughter; six children had already died. That must have given the reminders of mortality extra poignancy for her surviving family.

However, the memento mori was often subject to an alternative interpretation: that since life is fleeting, we should remember to enjoy it while we can. As the Old Testament also advises,

Let us eat and drink; for tomorrow we shall die.

If you would like to eat, drink and view these skulls for yourself then St Nicholas' Church offers the opportunity to do all three tomorrow (Saturday 12 June) at a Community Festival.