One of the pleasures of travelling is finding unexpected connections. As I walked around the Guernsey Folk and Costume Museum, which tells the story of island life, I came across a link to today's archive post from the Postman's Park series. 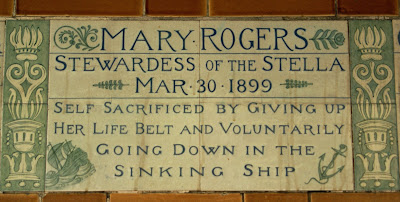 
In the Guernsey Folk Museum courtyard is the captain's skiff from the Stella. Smaller than the ship's lifeboats, it nonetheless carried 14 people to safety during the events in which Mary Rogers lost her life.

Delightful post, Caroline, and delighted for you that you discovered this connection to one of the poignant stories you celebrate in the (excellent) Postman's Park series (which surely deserves publication if some likely bod is paying attention).

What a sad but telling story.

One of the really interesting things about places like Guernsey is the extent to which they are truly part of the UK and its culture, or are merely protectorates of some sort, with their own independent history.

I have spent months reading about this issue for the Isle of Man, and now I am going to do the same for Guernsey and Jersey.

The Museum says its collection of costumes and artefacts is unique in that it consists of material from within the Bailiwick of Guernsey only. When you walked around the Guernsey Museum, did you get the feeling that their artefacts could not have belonged to any other part of UK history?