Sometimes, old buildings owe much of their charm to the fact that their historic environment has gone. The past was often noisier, smellier, more unhealthy and more polluted than the present. Thus the tranquil scene here would have been very different in the mid-nineteenth century when these cottages were built. 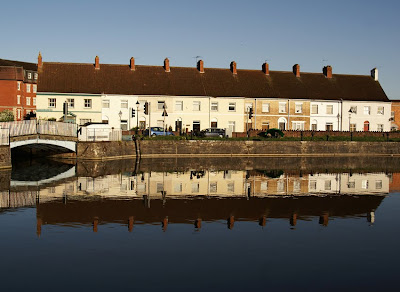 Bridgwater used to be a thriving port. Ships were built here; they brought coal and timber and left laden with agricultural produce, bricks and tiles. The docks opened in 1841 to accommodate them and to link the river to the Bridgwater to Taunton Canal. These houses overlooked the heart of that activity; nearby were warehouses, an animal feed mill, brick and tile kilns, and a steam engine operating the railway bridge (which slid apart to allow ships to pass).

Today, Bridgwater Docks no longer welcome cargo ships. Declining industry and competition from rail and road were among the factors which led to their closure. Frequent dredging, necessary to keep this tidal river clear enough for larger vessels to navigate, has long since ceased. Most of the industrial buildings have been replaced by residential developments. However, signs of the past endure, including this terrace. It can perhaps be considered a beneficiary of the changes to the town as it now quietly casts its reflection over calm water.

yes...beautiful, historic, romantic. I absolutely want to live next to water myself. And will, one day.

But it always occurs to me to ask what jobs will be available locally, once the children leave school? If the good jobs (or even the bad ones) have dried up, all the young adults will leave the area :(