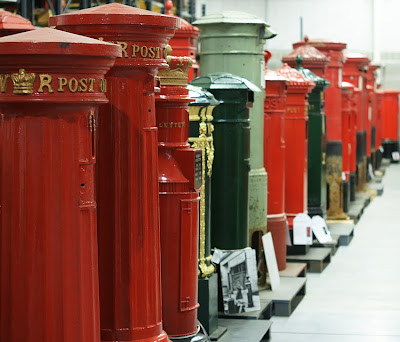 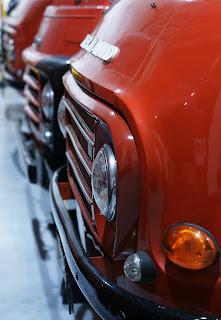 After seeing lots of London's postal heritage in the wild, I visited the Postal Museum Archive: a huge collection of all things GPO, including some real rarities. The collection takes in road, rail, sorting machines, stamp machines, telephone kiosks, Rowland Hill's desk...

The history of the postbox is beautifully illustrated by a whole series of examples. The earliest are particularly eye-catching: a lot of experimentation was required before the standard models were settled upon. Vertical slots proved to let in the rain; some kind of protective overhang was useful for the same reason; and the distinctive red colour won out over a more muted green because people realised that postboxes were more useful if they were easily spotted.

A lot of the discussion about postboxes centred upon their appearance. As with any new innovation, people worried about their effect on the landscape. One option was to encourage them to blend in, hence the early popularity of dark green.

Another was to make them a decorative feature, and I particularly liked the high Victorian example with lavish gilded decoration. There was one important oversight in the original design, though: so much attention was paid to amimal heads and garlands that there was nowhere to actually post letters through! A flap was hastily added on the top, emphasising that functionality was a last-minute afterthought. 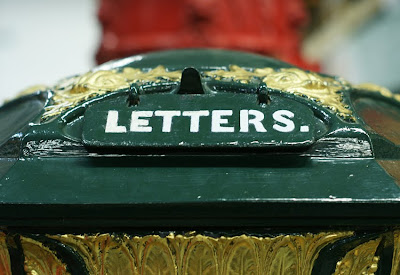 Another design error occurred with the 'anonymous boxes' of the 1880s. They remembered the slot this time, but forgot the Post Office branding including name, royal cipher and crown.

Among the vans of various vintages, a more low-tech but very eye-catching exhibit was the pentacycle. The Post Office was quick to experiment with cycles for its postmen, and this must have been one of the more extraordinary trials conducted. A sort of penny farthing on steroids, it has one large central wheel and four smaller ones (hence its alternative names of centre-cycle or hen and chicks). Although it was apparently popular with the postmen of Horsham, where it was trialled, the design was not generally adopted. 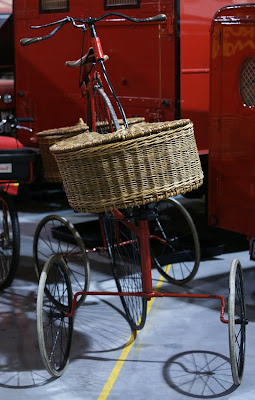 It's only by looking at the saddle and handlebars that I can tell which way that pentacycle would have gone.

Yes, even the baskets are symmetrical. I'm also amazed that the postment were happy to keep climbing on and off that very high centre wheel!

Postal heritage in the wild :) Love it!

Thanks for the reference to the BPMA. It will take me a while to work my way through their archives, but it seems like a great collection of relevant material.

It really is - and should you come to London, the store is definitely worth a visit.

I remember the hen and chicken. My grandfather made the replica in 1985 I think. I was located at Kidbrooke Royal mail mail engineers. London. I still have a photo of me sitting on it, in our back garden