Best-known for his books The Hunchback of Notre Dame and Les Miserables, Victor Hugo also had strong interests in politics and interior design. Both are evident in Guernsey, where this statue stands in Candie Gardens looking out to sea. 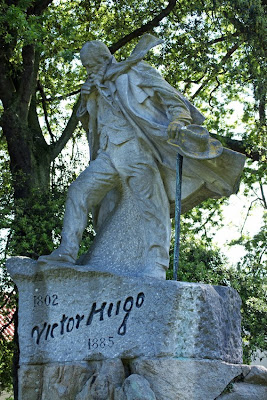 Hugo opposed Napoleon III, and as a result had to leave France in 1851. He and his family moved to Brussels and then Jersey before settling in Guernsey, where he remained until 1870. His family home was in Hauteville, St Peter Port; his mistress Juliette Drouet lived nearby.

The interior of Hauteville House is very much Hugo's creation, its design quirky and dramatic. Guided tours reveal the contrasts of light and shade, distinctive woodwork (often reusing table legs, chest panels and beds to create new and dramatic pieces), rich decor, integral political statements and, finally, the simpler rooms at the top of the house where Hugo actually slept and wrote.

Hugo kept the house even after his return to France. He had completed works including Les Miserables here, and Toilers of the Sea is partly set on the island. His family later gave the house to the City of Paris, who now operate it as a museum. The garden has been recently restored and, like the house, has impressive views across the harbour and sea: views which his rather dashing statue is no doubt happy to share.

Images and panorama views of the interior of Hauteville House are here.

Thanks for that. Hauteville House is terrific, and I think it is a shame that people don't know about Hugo's connection with Guernsey.

If his family gave the house to the City of Paris for a museum, how do the French run it on a British protectorate?

It is a little odd. I was surprised that you can only pay for admission in sterling, but the sign very firmly stated no euros!