A newspaper cutting of 3 December 1720, although only a sentence long, leads us into the history of a London-based institution:

Yesterday the Corpse of Dr. Cade, late Physician to St. Bartholomew Hospital, was carried to be interred at Deptford in Kent.

Looking for more information about Dr Cade, I soon found that his full name was Salisbury Cade and he qualified as Doctor of Medicine at Oxford. In 1694, he became a fellow of the Royal College of Physicians. On his appointment as one of two physicians at St Bartholomew's Hospital in 1708, he moved from south-east London to Old Bailey.

The Royal College of Physicians had been given its charter by Henry VIII, and existed to regulate physicians (those who had medical degrees, in contrast to the trades of apothecaries and surgeons). It saw itself as an elite body, admitting only Oxbridge graduates until 1835 and excluding women until 1909. Nonetheless, it was also concerned with public health and a few years after Cade became a fellow it would open England's first public dispensary, providing free treatment to the poor. 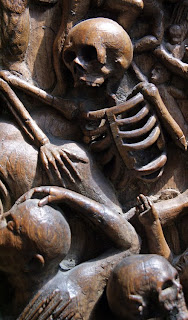 There was plenty of competition and disagreement between the branches of medical practice at that time, and the Royal College was at the centre of this despite having fewer than 200 members at any one time. (There would be significant growth in the nineteenth century and today it has over 20,000.) It enjoyed regulatory powers for the whole of England, and its powers to punish unqualified practitioners were resented by the other medical branches who saw the body as a protectionist one. The apothecaries were also pretty displeased that the Royal College's London Pharmacopoeia had a monopoly on regulating the composition of medicines.

Not until a quarter of a century after Cade's death would surgeons break away from barbers to form their own Company of Surgeons, which became the Royal College of Surgeons when granted its own royal charter in 1800. Apothecaries similarly had their origins in the City livery companies - they were part of the Grocers', but after much petitioning separated to form the Worshipful Society of Apothecaries in 1617. However, despite this recognition of their skills they continued to be regulated by the Physicians. In 1704 they won the Rose Case against the Royal College of Physicians: the House of Lords held that they could prescribe and dispense medicines. Only with the Apothecaries Act 1815, though, did they get the right to examine, license and regulate practitioners.

Cade was, then, in the branch of the medical profession which enjoyed the highest status at that time. He appears to have enjoyed some success within the Royal College: in 1716 and 1719 he was its censor. That role involved orally examining candidates who wished to enter the College and dealing with disciplinary matters.

Although all we know of Cade's birthplace is that it was in Kent, he was a scholar at Lewisham grammar school and until 1708 lived in Greenwich. Those facts suggest a strong connection to the area which may explain why he was buried in St Nicholas, Deptford.

Fascinating, Caroline. Used to meet parents @ the RCP HQ when young, unaware of its long & interesting history. Thank you for filling in some important gaps.