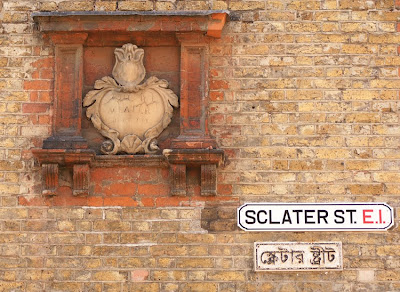 This little collection of signs seems to sum up a lot of the Brick Lane area's history.

Moving from the general to the particular, Sclater Street used to be home to a bird market. Montagu Williams QC, writing in 1894, described it thus:

Here was to be seen the East End bird-fancier in all his glory, surrounded by his pets and his pals. This little Street in Shoreditch forms the common meeting-ground for buyer and seller, chopper and changer, and I can safely say that nowhere in London is there to be seen so interesting a concourse of people. They are all absorbed in birds and bird-life. If you stand at one end of the narrow street and cast your eyes towards the other extremity, the scene presented is one long line of commotion and bustle. You hear remarks such as these: “Don’t desert the old firm, guvnor;” “Come, now, that’s a deal ;“ and “Wet the bargain, Bill.”

One side of the crowded thoroughfare is entirely taken up with shops, in the windows of which are to be seen all manner of wicker and fancy cages—from the largest “breeder” to the tiniest “carrying cage “—and birds of every description dear to the fancy—linnets, mules, canaries, chaffinches, bullfinches, starlings, and “furriners.” The cages are ranged in rows all round the wall.

Each vendor is busy shouting out invitations to the crowd to come and buy or “do a deal,” which, in most cases, means a “swop,” with a bit thrown in on one side or the other just to balance the bargain. The wares are not confined to the inside and outside of the shops. In the gutter and roadway are crates and boxes tenanted by fowls, pigeons, guinea-pigs,. and hedgehogs.

An incessant chatter goes-on. Jews and Gentiles squabble and bandy words over the respective merits of their posses­sions. Nearly every one in the crowd has something under his arm, tied up in a handkerchief—his own dinner, some dainty provender for his dickies, or what not. While Jack is showing to his intimates and admirers the linnet he has matched to sing against Tom Cooper’s at the Well and Fountain, Jim is vehemently, and in no very choice language, exclaiming against his bird for losing his last match “by a note.”

Read the rest of his description at Victorian London. A later observer in 1911, George R Sims, would describe similar scenes:

You press your way in and find that the shops are mostly packed with linnets, canaries, love-birds, Japanese nightingales, parrots, bird-cages and fittings, and all the necessaries and luxuries of pet-land. There are shops of all descriptions, but the bird industry predominates. Here along the kerb are hawkers, too. A man with a "spiteful sister" pantomime wig on is doing a roaring trade in fancy articles; a man dressed as a jockey is selling tips for the races. He presumes so far on the gullibility of his hearers as to assure them that he has left a racing stable by an early train and is to ride in the big event for which he is selling the stable secret. Here are barrows with limed twigs, with clods of turf for skylarks, and all kinds of bird-seeds set out for the fancy.

But it is in the roadway, in the densest part of the crowd, that you find the dominant note of the day's dealings. There you see everywhere little groups of men, each with a bird in a small cage, tied up in a blue bird's-eye pocket-handkerchief. The tying is all to one pattern. One side of the cage is open to the light, and the bird within is being eagerly examined by quiet connoisseurs. The fanciers, who bring their own birds to the fair and compare notes with acquaintances, do not say very much and are not very demonstrative. There is a reserved, almost melancholy, look on their faces. They suggest the patient listeners rather than the eager talkers. Most of them spend their leisure listening to their own birds or other people's.