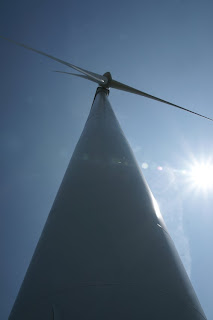 Wind turbines have become a common sight in Brittany. Their French name is éolienne, named for Aeolus, ruler of the winds in ancient Greek mythology. It may not be the most appropriate allusion, given that in Homer's Odyssey he provides a warning of the dangers of messing with wind.

Homer was stranded on Aeolus' island, Aeolia, so the keeper of the winds gave him a west wind to take him home. He also, with that dangerous generosity so common in Greek myths, gave him a gift bag of all four winds. Odysseus' crew thought that the bag contained gold and silver, so they opened it just before reaching home. Released, the winds blew the hapless ship straight back to Aeolia, where the disgruntled Aeolus refused to give further assistance.
- June 28, 2010

Email ThisBlogThis!Share to TwitterShare to FacebookShare to Pinterest
Labels: Brittany, myths and legends

Yes, I was intrigued by this romantic classical reference - and confess to having giggled a bit at the high-falutin' tone thus set for what is in fact disruptive, cumbersome (and, according to some reports, not necessarily all that productive) machinery. I smell a con of the public going on, here ... surprise, surprise ;-).