This pair of 1920s council houses are far more unusual than they first appear. The semi-detached homes are built from cast iron. 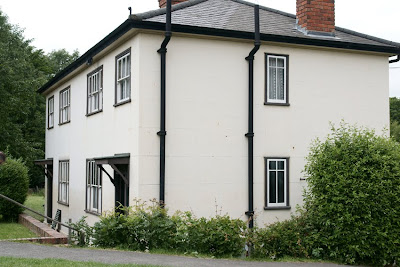 After the First World War there was huge demand for housing. However, the war had led to a loss of skilled labour, so alternatives were sought. One thing the Black Country did have was plenty of capacity for iron founding, as it was a local industry short of work. Thus building houses in pre-formed cast iron which could be easily and quickly assembled on-site appeared a good solution. There was a big problem, though: despite all these advantages, each cast-iron house cost twice as much as a brick home and so only two pairs were built in Dudley and about 500 nationwide. (Nonetheless, they would catch the attention of Time Magazine.)

Four men would put together the 600 panels, line them inside with asbestos sheets and insulate the cavity with waste wool. The roof was more traditional, tiled in slate. Inside was pretty smart by contemporary standards, with an indoor bathroom and flush toilet, running hot water and a large living room instead of the traditional parlour. The rent was correspondingly higher, though, so it was out of the reach of most ordinary families.

The building didn't rust as long as it was repainted every few years. Pale-coloured paint not only protected the walls but also reflected heat to keep the house a little cooler in summer. Cared for in this way, the houses remained occupied until 1987 when their demolition was ordered by Health Inspectors. Happily, they were instead rescued and rebuilt in the Black Country Living Museum.

Thanks Caroline - a fascinating tale of making do! Thanks also for the link to the museum, I hadn't heard of it before.

Thank you, aren't they great! I'd heard of the museum but never visited before; I really enjoyed it, and there's a huge amount to see.

Fascinating. There have been several attempts at making prefabricated buildings in the UK, but something always seems to go wrong, or they turn out to be too expensive, so this kind of building doesn't catch on. The expense would probably be reduced if they built more, of course, but we never seem to get that far. The people who live in prefabricated houses usually seem to like them - this is most famously true of the postwar prefabs, which are now an endangered species but which survive at such places as the Excalibur Estate in Catford.

Thank you for reminding me about the ones in Catford: I really should go and have a look. I vaguely remember various schemes for prefab flats floating around a few years ago, but again they don't seem to have got anywhere. (I suspect because in London, the land is too expensive to make any flats very cheap, however they're built.)