Deptford Fair commences on Monday. The three crack amusements of Greenwich Fair – Richardson’s theatre, Alger’s Crown and Anchor booth, and that curious and pleasing mechanical contrivance, the Voyage Volante, or the Flying Ships, belonging to Mr. Saville, will contribute to its gaieties.

Those two sentences suggest two questions. First, what was Deptford Fair? Second, what were those attractions?

Deptford Fair was very much tied into another piece of local history, Trinity House. After this body moved out of the town, it still made an annual visit to Deptford, complete with procession; entertainments for onlookers had expanded by 1825 into a full-sized fair. It was held on Trinity Monday, eight weeks and a day after Easter. 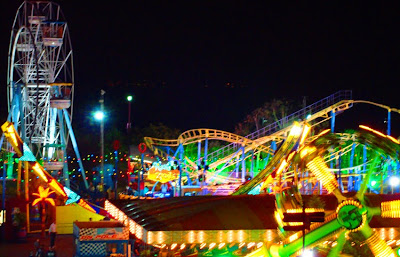 As for the attractions, we can get a pretty good idea of Alger's Crown & Anchor booth from William Hone's Every-Day Book. Published in 1826, it includes a visit to Greenwich Fair.

"The Crown and Anchor" booth was the great attraction, as indeed well it might. It was a tent, three hundred and twenty-three feet long, and sixty feet wide. Seventy feet of this, at the entrance, was occupied by seats for persons who chose to take refreshment, and by a large space from whence the viands were delivered. The remaining two hundred and fifty feet formed the "Assembly room" wherein were boarded floors for four rows of dancers throughout this extensive length; on each side were seats and tables. The price of admission to the assembly was one shilling. ... This room was thoroughly lighted up by depending branches from the roofs handsomely formed; and by stars and festoons, and the letters G. R. and other devices, bearing illumination lamps. It was more completely filled with dancers and spectators, than were convenient to either. ... There were at least 2,000 persons in this booth at one time. In the fair were about twenty other dancing booths; yet none of them comparable in extent to the "Crown and Anchor."

Richardson's theatre was absent on Hone's visit to Greenwich thanks to the magistrates' attempts to suppress the fair:

neither Richardson's nor any other itinerant company of performers, was there. There were gingerbread stalls, but no learned pig, no dwarf, no giant, no fire-eater, no exhibition of any kind.

Their absence was noteworthy because Richardson's was a fixture at London's fairs. A year after our newspaper report, Dickens gave a wonderful description of the show:

This immense booth, with the large stage in front, so brightly illuminated with variegated lamps, and pots of burning fat, is ‘Richardson’s,’ where you have a melodrama (with three murders and a ghost), a pantomime, a comic song, an overture, and some incidental music, all done in five-and-twenty minutes.... A change of performance takes place every day during the fair, but the story of the tragedy is always pretty much the same. There is a rightful heir, who loves a young lady, and is beloved by her; and a wrongful heir, who loves her too, and isn’t beloved by her; and the wrongful heir gets hold of the rightful heir, and throws him into a dungeon, just to kill him off when convenient, for which purpose he hires a couple of assassins—a good one and a bad one—who, the moment they are left alone, get up a little murder on their own account, the good one killing the bad one, and the bad one wounding the good one. Then the rightful heir is discovered in prison... and the young lady comes in to two bars of soft music, and embraces the rightful heir; and then the wrongful heir comes in to two bars of quick music (technically called ‘a hurry’), and goes on in the most shocking manner, throwing the young lady about as if she was nobody, and calling the rightful heir ‘Ar-recreant—ar-wretch!’ in a very loud voice, which answers the double purpose of displaying his passion, and preventing the sound being deadened by the sawdust. The interest becomes intense; the wrongful heir draws his sword, and rushes on the rightful heir; a blue smoke is seen, a gong is heard, and a tall white figure... slowly rises to the tune of ‘Oft in the stilly night.’ This is no other than the ghost of the rightful heir’s father, who was killed by the wrongful heir’s father, at sight of which the wrongful heir becomes apoplectic.... Then the rightful heir throws down his chain; and then two men, a sailor, and a young woman (the tenantry of the rightful heir) come in, and the ghost makes dumb motions to them, which they, by supernatural interference, understand—for no one else can; and the ghost (who can’t do anything without blue fire) blesses the rightful heir and the young lady, by half suffocating them with smoke: and then a muffin-bell rings, and the curtain drops.

Finally, the voyage volante was the very latest thing in fairground rides, having first appeared at Greenwich that very year. This rising and descending roundabout was, Clive Aslet tells us, operated by two men underneath the machine who turned its central mast. All the fun of the fair indeed!