From the archives: underground steam

At the moment, London's Underground seems to be either hot and sticky or damp and sticky, depending on the weather. We won't even mention weekend engineering work. It used to be much, much worse though: 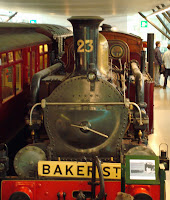 As a Victorian invention, London’s underground railway system pre-dates the internal combustion engine. The first trains therefore used steam engines, making travel on the Tube far more unpleasant than today’s hot and overcrowded commutes! This locomotive, Number 23, is the only survivor from that period and now lives in the London Transport Museum.
The first locomotives were run by the Great Western Railway, so it’s unsurprising that some features of the underground trains mirrored their open-air counterparts - not only carriages with compartments and luggage racks, but also the fare structure. Like normal railways, the underground initially offered first, second and third class travel; there were also special cheap ‘parliamentary’ fares for workmen on 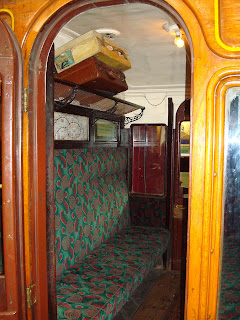 early morning services. Parliament had forced the operators to offer these, partly to compensate the people forced to move to make way for the building of the underground. In 1873 the fare from Paddington to Notting Hill Gate was 4d first class, 3d second class, 2d third class and 1d with a parliamentary fare.
Unsurprisingly, running steam trains in confined tunnels meant a hot, smoky atmosphere described by The Times as ‘a form of mild torture’. Attempts were made to minimise the unpleasantness. Rather than escaping into the tunnel, the exhaust steam was run through pipes into cold water where it condensed; coke was used instead of coal; and smoke vents allowed the fumes to belch out into the road above, startling passing horses. Despite these efforts, however, it must have been an enormous relief when electrification was introduced in 1905.
- July 25, 2010