There isn't actually a museum of ghost signs: the logistical problems are obvious! However, at the weekend I did visit a museum with ghost signs, the Black Country Living Museum.

This open air site has a number of buildings from all over the Black Country which have been carefully moved and reconstructed brick-by-brick. Among them are a couple which had painted adverts, and these have of course made the move with them. 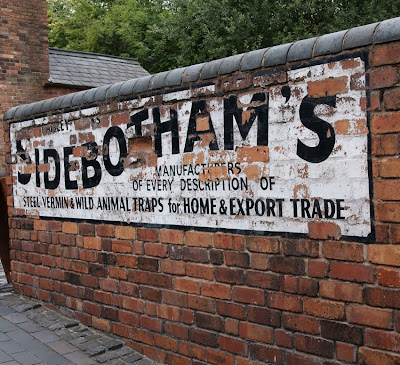 Sidebotham's Trap Works comes from Wednesfield, a town specialising in animal trap manufacture. (Such local specialisation was common in the region.) They exported all over the world. However, in the second half of the twentieth century changes including new legislation on trapping and the introduction of myxomatosis saw a dramatic decline in the trade. 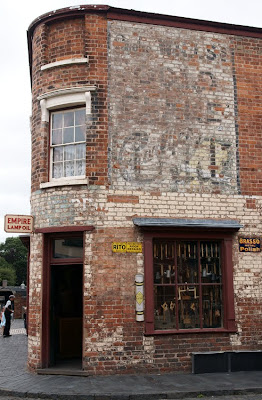 Nash's Ironmongery was originally in Oldbury. It sold all sorts of items to both domestic and trade customers, and even cut keys. The Museum have recreated it as it was in the 1930s. However, one thing the shop didn't stock was tobacco so the proprietor was presumably paid for hosting this advert for Wills's Gold Flake. 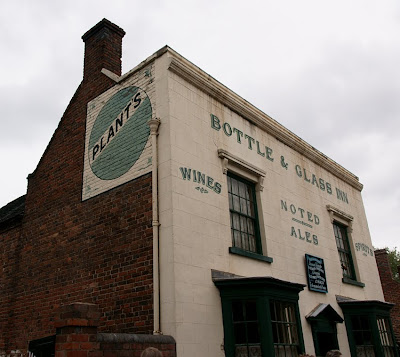 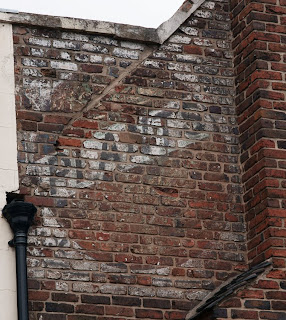 Since ghost-hunting can be thirsty work, the Bottle & Glass Inn is an essential stop. Tranpsorted from Brockmore, where it backed onto the canal, it really does serve beer. Do take a look at either side wall, though: here are signs for Plant's brewery. Although the pub is Victorian, Plant's was founded in 1901 and based in Dudley, at the heart of the Black Country.

Of course, should you be short of beer money then there is a final resort: the pawnbroker. Such establishments provided loans - secured on property ranging from jewellery to clothes - to those who would otherwise have difficulty obtaining credit. Indeed, they have undergone a revival in recent years and are once more playing that role. However, if the borrower is unable to redeem their pledge (repay the loan to get their pawned item back) then the property is sold. The broker therefore takes little risk, but borrowers might lose essential items or even the work tools they needed to earn a living. 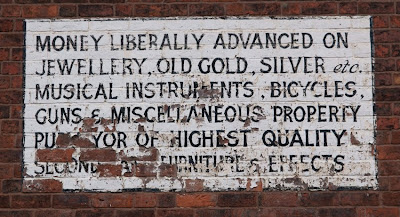