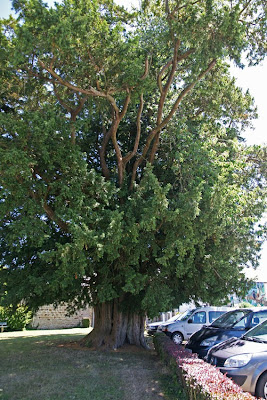 This yew tree, in a churchyard in the Breton village of Saint Launeuc, is quite impressive in its own right: apparently it's as old as the church, dating back to the thirteenth century. Admittedly though, that makes it a relative youngster in yew terms as they can live for several thousand years. London's oldest is probably the Totteridge Yew, which predates its church by a good number of centuries.

However, what makes St Launeuc's really special - and earns it the designation of 'remarkable tree of France' - is that it shelters a wild cherry tree. The younger fruit tree actually grows inside the yew, their leaves and branches mixed together and the cherry's roots reaching inside the yew's huge trunk. This may not be the best place for fruit-picking, though: the yew's own red berries are the only non-poisonous part of the plant, but the pips inside are highly toxic.