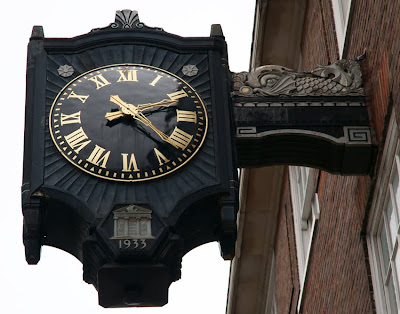 A closer look at the Allied Irish Bank in Marlborough Place, Brighton reveals lots of non-financial detail. First, the clock with its fishy bracket is dated 1933 - the year the building was erected. (Click here for a photograph of its predecessor.) 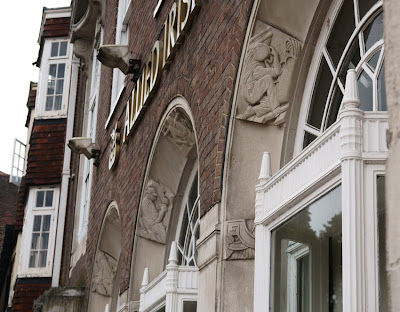 Above the windows are reliefs by Joseph Cribb depicting various construction trades (the architect is modelled on none other than John Leopold Denman, actual architect of this building). Cribb was Eric Gill's first apprentice, working with him from 1906 until Gill's death in 1940, although from the 1920s he also undertook work on his own account. He had moved with Gill to Ditchling where they were founding members of the Guild of St Joseph and St Dominic, a Catholic artists' colony near Brighton. When Gill moved away, Cribb took charge of the stonecarvers' workshop and would train his own apprentices. 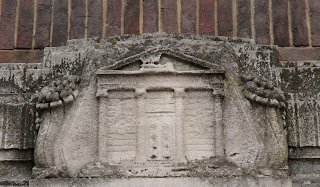 The construction theme of these reliefs reflected the building's original purpose as the premises of the Citizens Regency Building Society. In a sense, it hasn't strayed too far from that use today - but the apparent incongruity of these sculptures perhaps reminds us that there are important differences between banks and building societies. 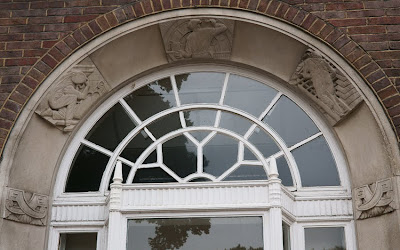 Email ThisBlogThis!Share to TwitterShare to FacebookShare to Pinterest
Labels: art

Fascinating slice of commercial history, here - it's a huge (& doubtless v revealing) subject, design in the 'bancassurance' sector.
Your final sentence speaks volumes! The changes wrought by increasing demutualisation are mostly destructive. Time to revive the friendly society & the local credit union (interestingly, evidence of the latter appeared all over Dublin when I was there: E Gill & Co would have approved, I suspect)?

Brilliant post, thank you. I love buildings that have decorations featuring buildings, and of course this subject matter is perfect for a building society. And this is very timely: we need more mutuality now!

Thank you both - and yes, more mutuality would be a very good thing! Deptford/New Cross does have a small credit union, although their website isn't very helpful and I've not got round to investigating further.

why did the Citizens Regency Building Society (or its predecessor) ask for a fishy symbol?

I have no idea! Perhaps it's a reference to the Brighton coat of arms, which has two dolphins? (You may think this looks nothing like a dolphin, but it's not bad for a heraldic dolphin!)

Indeed! This is a brilliant post. I can still remember when we are in that amazing place. Everything is so perfect. That big watch is so unbelievable.

That was some amazing detailed work done on that building. Great post!