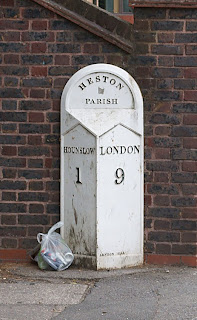 This milestone, rather reminiscent of the one in South Kensington, is on the road between Hounslow and Isleworth. However, despite having fewer olde worlde flourishes, it's also somewhat senior to its eastern counterpart: at the bottom it's dated 1834.

This milestone is one of a number on the London-Staines road. It was cast by R U & J Barrett, who would no doubt have been proud to know that their work would survive so long.