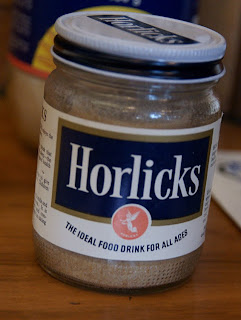 Last week I visited the Horlicks factory in Slough; today, let's look into the contents of that soothing drink itself. For over a century, it has been promising us a good night's sleep, but what does it actually contain?

Horlicks has its origins in James Horlick's work with the Mellin Company, who made baby food using a drying and concentrating process. Dried malt and bran was sold ready to be mixed with milk and water and fed to baby. Keen to market a new drink based on this process, James joined his brother William in the United States and founded Horlicks.

The consumer originally had to make up Horlicks Food with sterile milk, but it occurred to the brothers that if the milk was included in the dried mixture then it need only be mixed with hot water. Thus Horlicks was born, originally marketed as a complete food for babies and invalids. Its name was changed to Horlicks Malted Milk, although in the 1930s it would become simply Horlicks.

There is one further twist in the story of the Horlicks formula. Since 1960, the drink has been manufactured in India - where buffalo milk is used in place of the original cows' milk.

Interesting - but does anyone actually ever drink the stuff today?

Filthy stuff! We were 'allowed' it before retiring for the night @ my school. Interesting to hear what we were drinking contained buffalo milk, tho' - and heartening: bound to be more nutricious + possibly lower in cholesterol than cow's milk - so at least that part of our diet was OK. Ish ...!!

PS School not too far down the line from Horlicks factory outside King's Langley; so was there some kind of nefarious deal going down, I wonder. I think we should be told!

Funnily enough, Adam, one of the things that came through is that for every generation it's something their parents used to drink. Yet it keeps on selling!

Minnie, it's better eaten straight from the jar when it tastes just like Malteser middles. Rather unhealthy, though!