From the archives: Deptford Dockyard to the University of London

Thames week continues with the story of an institution not normally connected with the river. The School of Hygience and Tropical Medicine, however, has its origins right here on the river in Deptford.
What connection does Deptford Dockyard have to the University of London? The answer is that a hospital ship moored there nearly 200 years ago was the seed of the London School of Hygiene and Tropical Medicine, today a college of the University.

The Seamen’s Hospital Society was established to care for sailors in the merchant navy and fishing fleets, ie those outside the Royal Navy and its institutions. In October 1821, seven months after the society’s first meeting, a hospital ship came into service at Deptford: HMS Grampus, a former naval vessel. It had been commissioned in 1803 and was employed in the East Indies, the Cape of Good Hope, and as a troopship before its latter career as a floating hospital. The ship’s surgeon, Dr David Arnott, was paid £150 per year. The hospital treated sailors of all nations; during cholera outbreaks it would moor a smaller boat alongside to act as an isolation unit. The ship’s capacity was soon stretched as it treated over 2,000 people a year. 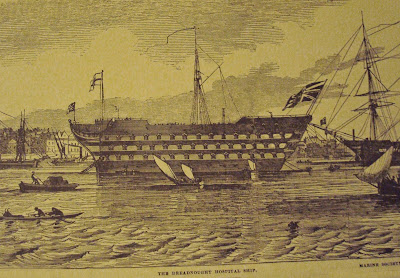 Ten years later, the Society’s hospital moved onto the larger HMS Dreadnought (and then a second ship, also renamed Dreadnought). When it came onshore and took over the former Royal Naval Hospital at Greenwich in 1870, it renamed it the Dreadnought Seamen’s Hospital and began to employ female nurses for the first time. This hospital would continue providing care to seamen at Greenwich until 1986; today the former premises are part of the University of Greenwich.

Such medical services were important for two reasons. First, in the days before the NHS, people often relied upon charitable institutions to provide medical care. The Seamen’s Hospital Society was one such charity. Second, sailors often had specialist medical needs which the hospital met in two notable ways. One was its campaign for lime juice to be provided to sailors to prevent scurvy; the other was the realisation that as sailors’ work took them around the world, they might contract diseases unfamiliar to most British doctors. The ability to treat such illnesses was central to the development of the Society’s facilities.

In 1890, the Society opened a new branch of the hospital: the Albert Dock Seamen’s Hospital. Here, the London School of Tropical Medicine was established in 1899 by Sir Patrick Manson, who had worked in the Far East and believed strongly in the importance of training doctors to properly treat people dying of tropical diseases. The School moved to central London in 1920. At the same time, the Society created a Hospital for Tropical Diseases near Euston Square; it still exists today, as part of the University College Hospitals NHS Trust. The Society itself also continues to look after the welfare of sailors through grants, a benefits advice line, and the Dreadnought Unit at St Thomas’ Hospital.