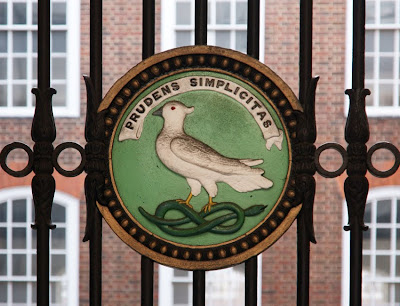 On a gateway in Fleet Street, a dove stands under the motto prudens simplicitas and on top of a knot. Look closer, and it's not string but a twisted serpent forming this unusual perch. Further down the gate is the legend 'Serjeant's Inn'. However, that is in a sense misleading, for the symbols belong to a quite different organisation.

The Inn dates from the 15th century and was home to serjeants-at-law, an order of barristers. By the eighteenth century, its members would join with another inn on Chancery Lane; part of the site at 50 Fleet Street was occupied by the Amicable Society from 1838. This, the world's first mutual life insurance company, later merged with Norwich Union.

The dove and serpent topped the Amicable Society's coat of arms; prudens simplicitas (prudent simplicity) was their motto. The unusual choice of creatures may refer to a biblical quotation in which Jesus exhorted followers to be 'wise as serpents, gentle as doves'. Lost during builidng works, the gates were rediscovered in a scrapyard in 1937 and returned to their original position here in 1970.

Thanks for explaining the mystery & some of its history. To think that, had the gates not been sold for scrap in the '30s, they probably wouldn't have survived WWII. Amazing amount of history & cultural background in one, small-ish symbol.

This legend & device was awarded to the Fredericks/Fredricks clan in the 15th century.