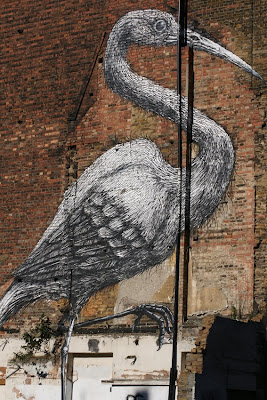 One of the good things about walking to work from Shoreditch High Street is the amount of street art in the area. Among the most eye-catching examples are ROA's giant animals, including this rather appealing bird perched just off Brick Lane. There's an account of its creation at Spitalfields Life: it involved a cherrypicker, conversion from a heron to a crane, and plenty of spray cans! For most Londoners, it's a good thing to see our streets populated by such wildlife.
However, they're apparently less enthusiastic about it over at Hackney Council: Londonist reports that they have ordered the removal of ROA's giant rabbit from the Hackney Road. The building's owners approved it and love it, but that isn't cutting much ice. Apparently it's just 'graffiti ... clearly visible from the road.' Given the complete lack of resemblance to, er, graffiti, and the lack of threat posed by this particular bunny to local lettuces, the decision seems rather harsh. Supporters have hopped into action with a petition.

Good for you, Caroline. Gorgeous images. Roas's a brilliant draughtsman, and bringing art AND wildlife to run-down streets is a brilliant enterprise; but Spitalfields Life's piece is so eloquent about the power of these images that I don't need to say more.
Although, that 'rabbit' is really a hare ...;-)!

I'm sure you're right about it being a hare - but it has become 'the rabbit' to its supporters so I'll stick with it! I could also think of more rabbit puns (on reflection, probably not a good thing).

Fair enough. And, oh dear, but the little beggars (rabbits, that is) get a seriously bad press ... worse here in France, as I'm sure you already know!