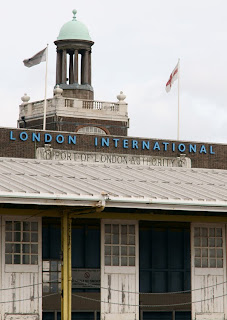 Showing a Ryanair-style flair for naming, the London Cruise Terminal is in fact not in London but in Tilbury. However, it has a far more venerable history than any budget airline, having been opened by Ramsay Macdonald in 1930.

Liner berths had been available at Tilbury since 1909, when they were opened especially for P&O. The new passenger landing stage was part of an expansion which also saw a railway station open alongside. Many of the passengers using these facilities were making truly momentous journeys, passing through as emigrants or immigrants. The Empire Windrush arrived here from the Caribbean in 1948; countless 'Ten Pound Poms' departed for a new life in Australia. As immigration and international travel came to depend more upon aeroplanes than upon ocean liners, however, the terminal declined and closed in the 1970s. 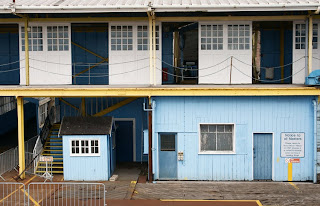 The story has a happy ending, though: the Cruise Terminal is now open once more, this time to serve cruise ships. (The neighbouring railway station remains closed; the primary transport link is now the M25 motorway.) Tourists leaving for the Baltics, the Netherlands and even the Amazon, or arriving to enjoy London and South-East England have brought new life - although the Grade II listed structure retains its vintage style and an air of shabby gentility.